When former President Donald Trump appeared on the “Full Send” podcast on YouTube for the NELK Boys, who are known for their prank videos, it garnered more than 5 million views in 24 hours.

And then the Big Tech censors stepped in and YouTube removed the interview. 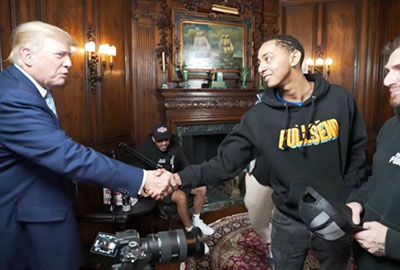 “Whatever happened to free speech in our Country? Incredibly, but not surprisingly, the Big Tech lunatics have taken down my interview with the very popular NELK Boys so that nobody can watch it or in any way listen to it,” Trump said in a statement released by his Save America PAC.

“In the 24 hours that it was up it set every record for them, by many times,” he continued. “Interestingly on the show I told them this would happen because Big Tech and the Fake News Media fear the truth, they fear criticism about Biden, and above all, they don’t want to talk about the Rigged 2020 Presidential Election, all topics discussed.”

Trump went on to add that media censorship in the U.S. is headed in a direction similar to Russia, where he said “people are not allowed to know that they’re fighting a war with Ukraine.”

During the interview, Trump and the hosts spoke on a variety of topics, including Russia’s invasion of Ukraine, the 2020 presidential election and how the Village People’s 1978 disco hit “YMCA” is his top pick for when he DJs parties at his Mar-a-Lago resort in Florida.

“The election fraud was massive,” Trump reportedly said. “I call it ‘the crime of the century.’ We’re doing a book on it.”

It was the discussion of the election which triggered the YouTube censors.

“Full Send” host Kyle Forgeard said YouTube stated the interview was taken down “for violating our election integrity policy, which prohibits content containing false claims that widespread fraud changed the outcome of the 2020 U.S. presidential election. We allow content with sufficient educational, documentary, scientific or artistic context, which the video we removed did not provide.”

Trump appeared to warn that the video might be taken down during the interview, telling the podcast hosts, “If you put up this whole interview, let’s see what happens when Instagram and Facebook and Twitter and all of them take it down,” according to Wired.

Here is the Trump interview in its entirety, courtesy of Rumble: