President Donald Trump on March 16 signed legislation which calls for the U.S. government to support expanded official visits to and from Taiwan “at all levels.” 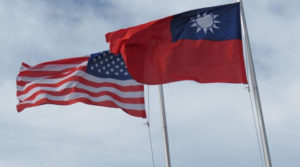 China voiced its displeasure with Trump’s signing of the Taiwan Travel Act, saying that it “severely violates the one-China principle, the political foundation of the China-U.S. relationship, and the three joint communiques between China and the U.S.”

None of the three joint communiques declared during the 1970s and 1980s were ever approved by the U.S. Congress.

Geostrategy-Direct reported on March 6 that, the legislation comes amid increased tension between China and Taiwan.

China recently began flying both military and commercial flights down the center of the 100-mile wide Taiwan Strait. Taiwan’s air force scrambled jets to intercept the flights that it says intrude on the island’s air defense zone.

Meanwhile, the Pentagon in January authorized the transfer of 250 Stinger anti-aircraft missiles to Taiwan.

The new legislation states that it will be U.S. policy to permit visits to Taiwan by “cabinet-level national security officials, general officers, and other executive branch officials” to meet Taiwanese counterparts.

“The signing of the Taiwan Travel Act is a symbolic but nevertheless meaningful act by the U.S. Congress and the president that expresses support for Taiwan,” said Russell Hsiao, executive director of the Washington, D.C.-based think tank Global Taiwan Institute. “It also shows that the United States is pushing back against the PRC’s bullying and conveys a powerful statement of support to the people of Taiwan and its democratically elected leaders.”

Sen. Marco Rubio, Florida Republican and a key sponsor of the legislation, said that “Taiwan is a fellow democracy and important partner in the Indo-Pacific region. It is critical for the United States to strengthen our ties with Taiwan, especially as China increases efforts to isolate Taiwan and block its participation in international organizations.”