Trump ready to move on CHOP (formerly known as CHAZ)

The area in Seattle formerly known as the nation of CHAZ (Capitol Hill Autonomous Zone) has been renamed CHOP (Capitol Hill Organized Protest), possibly, as one pundit noted, because the zone’s leaders realized CHAZ sounded too much like a badly-named 1980s metal band. 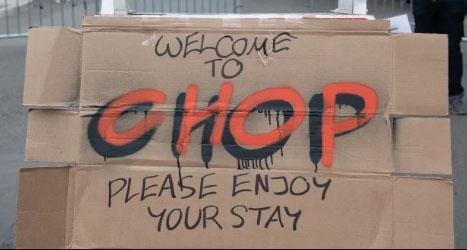 Reports on Tuesday said that the CHOP zone has been winnowed down from a seven-block area to a three-block area as the city and the anarchists occupying the territory reportedly reached an agreement to have temporary roadblocks erected by the occupiers replaced with concrete barriers.

The development comes after the Seattle City Council on Monday voted unanimously to ban police from using chokeholds, and crowd-control devices like tear gas and pepper spray.

Trump said on Monday: “These people have taken over a very good part of a place called Seattle. Seattle is big stuff. That’s a major city. We have a governor who was a stiff and we have a mayor who said this is going to be a love fest. By the way, these are violent people that took it over. These are not people who are nice people.

“You have a governor that doesn’t do anything about it and you have a mayor that doesn’t know she’s alive. She is talking about how it’s going to be a ‘love fest.’ If they don’t do the job I will do the job and I’ve already spoken to the attorney general about it.”

Asked what type of action the administration might take, Trump said there were a number of options that could “solve the problem quickly” but declined to list any of the possibilities he might have in mind.

Trump then turned to media coverage which celebrated the autonomous zone. The president suggested that if the tables were turned and right-wing occupiers had taken over a section of a major city the coverage would be very different.

“If the right ever took over a city, if conservative Republicans took over a city, it would be the biggest story in history,” Trump said. “You can’t even find stories about Seattle. It’s incredible … What I would like to see before we do something, I would like to see the press come in and cover it. Because they’re not — It’s not that they’re covering it badly, they aren’t covering it at all.”

Fox News reported that, early Monday morning, a Seattle auto repair shop located on 12th street, but outside the CHOP’s initial perimeters, was reportedly broken into by a thug who attempted to light a fire before the business owners arrived and detained him. The owner told local news outlets that despite over a dozen 911 calls, no police or fire personnel arrived at the scene, which grew violent when armed protesters broke down the fence, demanding the suspect be released.

On Tuesday, Fox News reported that the fire team was waiting on a police escort to the business, but police did not want to enter the area to escalate tensions. Seattle police took a report of the incident and sent officers to the periphery, but did not engage with the business owners or occupiers or take the suspect into custody.