President Donald Trump is, by far, the best presidential golfer in history, according to Golf Digest.

The golfing magazine published a list of the top 20 presidential golf handicaps. Trump led the way with a 2.8 handicap. 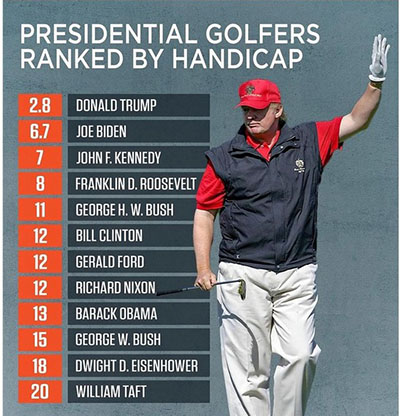 Joe Biden allegedly is in second with a claimed handicap of 6.7. Observers say that must have been from his Corn Pop days, because video of Biden’s recent golfing outings are more embarrassing than indicative of a skilled golfer.

Following Trump and Biden among the leaders in “Presidential Golfers Ranked By Handicap,” are President John F. Kennedy with a 7 handicap, and President Franklin D. Roosevelt with an 8 handicap.

Many observers have stated that Trump is the real deal on the golf course.

A 2017 Golf Digest article noted: “Trump’s swing is imperfect but grooved, and it soon engenders a certainty that nothing really bad is going to happen to his golf ball. He has a flat takeaway well to the inside and loads hard onto his right side. Before starting down, his shoulder plane raises into what at first looks like a duffer’s over-the-top move. But Trump simultaneously unleashes the kind of aggressive opening of the left hip that is rarely seen in older amateurs, clearing the way for the club to release from an inside path.”

Trump said at the time: “For me, it’s all about the hips. Just get them out of the way as fast and as hard as I can and let the arms really swing through. I read about the hips a long time ago in Ben Hogan’s book, and it became my simple key, and I’ve stayed with it. It might look a little crazy, but the more I clear, the straighter I hit it.”

As for Biden, “it’s possible that at one point in time” he was “a decent golfer,” Spectator World noted in May of last year. “He’s been a member of Wilmington Country Club in Delaware since 2014 and reportedly had as low as a 6 handicap. That’s a bit hard to believe as former president Barack Obama said he had an ‘honest 13’ handicap after playing 300 rounds of golf.”

the leader of the free world making a mockery of us on the golf course. hate to see it. pic.twitter.com/oYRGrQtBWJ

PGA pro John Daly once said that Bill Clinton was the worst presidential golfer he ever played with (and the biggest cheater).

President George W. Bush gave up playing while in office after anger over his declaration to “watch this drive” right after denouncing terror in the Middle East. To his credit, Bush did appear to crush the drive.