Trump: ‘Radical Left is not the majority’; YouTube bans live-streaming of CPAC speech 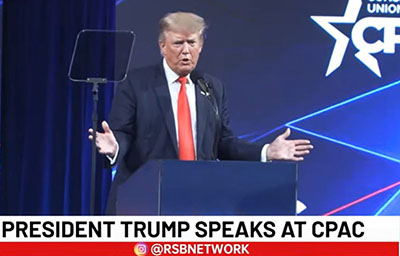 ACU Chairman Matt Schlapp said he learned that ACU’s YouTube account had been frozen for seven days over a video posted on Friday in which Trump announced his class-action lawsuit against Big Tech giants Google, Facebook and Twitter.

Due to the ban, ACU, which runs CPAC, was prevented from uploading Trump’s speech or any other live content from its CPAC 2021 Part 2 in Dallas over the weekend.

Never forget that the radical left is not the majority in this country, we are the majority and it’s not even close. …

The radical left has been methodically taking over every institution in American life [schools, universities, corporations Hollywood]. …

We are not going to let [American freedom] be taken away from us by a small group of radical Marxist maniacs.

Trump characterized social media’s censorship and suppression of free speech and press during the 2020 presidential election “a major attack on our Republic.” He said Facebook founder Mark  Zuckerberg had financed the placement of drop boxes in several key states “to boost, illegally” the Democratic vote.

“It is clear that YouTube censored CPAC because we stood with former President Donald Trump on his lawsuit against Big Tech,” Schlapp said. “This is yet another example of Big Tech censoring content with which they disagree in order to promote the political positions they favor.”

According to the ACU, YouTube said in a note it had removed the July 9 episode of the conservative group’s “America UnCanceled” program for “medical misinformation,” though it did not specify the statement.

“ACU believes YouTube was offended by sound medical research conducted by the Smith Center for Infectious Diseases & Urban Health and Saint Barnabas Medical Center. Former President Donald Trump referenced the study in the video that YouTube removed, saying, ‘doctors and medical groups have been barred from these platforms for posting about therapeutics such as hydroxychloroquine … now, most recent studies say [the drug is] effective in combating the virus,’ ” the ACU said in a statement.