President Donald Trump brought an energized crowd at the Conservative Political Action Committee (CPAC) meeting in Orlando, Florida to their feet multiple times with optimism and humor as he cast a renewed vision to Make American Great Again after the failures of the Biden administration.

In what amounted to the State of the Union address, he also left no doubt that he will be the Republican candidate in 2024. 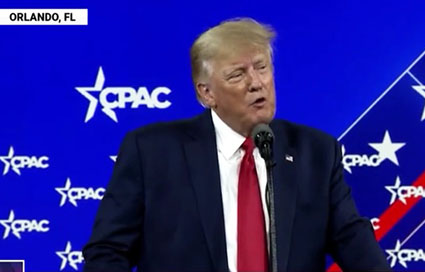 “I’m thrilled to report that our incredible movement, a movement that nobody’s ever seen anything quite like it. . . is strong and growing stronger every single day.” Trump said.

“The socialists, globalists, Marxists, and communists who are attacking our civilization have no idea of the sleeping giant, they have awoken, we are sleeping. They cannot even begin to imagine the brave and righteous spirit they’ve unleashed in men and women.

Telegraphing his run in 2024, Trump continued, “But they’re going to find out the hard way starting on November 8, and then again even more so on November 2024. They will find out like never before. We did it twice. . . . We’re going to be doing it again. A third time.”

Optimistic about the midterm elections, Trump added, “2022 will be the year that millions of everyday citizens stand up to the left wing fascists.”

“The President is such an important representative,” Trump continued. “Now we obviously know that. But just a wrong word or . . . a yawn or going to sleep very early, like at four o’clock. . . It’s so important psychologically so important for our country.”

“You also have to portray his strength to the outside world. Otherwise, they’re going to walk all over you. And that’s what they’re doing right now. You could take the five worst presidents in American history and put them together, and they would not have done the damage that Joe Biden and his administration has done in just a very short 13 months. And no matter how you look at it, our country has totally lost itself confidence, loss of self confidence. We as a country have no confidence anymore, but we will get it back and we’ll get it back stronger than ever before.”

Linking Biden’s projection of weakness and the disastrous withdrawal from Afghanistan to the current crisis in Ukraine, Tump observed:

“Our great military has been humiliated in its surrender from Afghanistan. And that’s what it was. It was a surrender for no reason whatsoever. We wanted to get out, but we had to get out with strength and with dignity.”

“And a major war in Europe may very well erupt,” he continued. “That’s how they start exactly what’s happening today. This is how they start. Joe Biden is turned calm into chaos, competence into incompetence, stability, into anarchy and security in catastrophe. The Russian attack on Ukraine is appalling. It’s an outrage, and an atrocity that should never have been allowed to occur. It never would have occurred.

“We are praying for the proud people of Ukraine. God bless them all.”

A stolen American election has international consequences, Trump pointed out.

“As everyone understands, this horrific disaster would never have happened if our election was not rigged, and if I was the president,” Trump continued.

“Very simple: It wouldn’t have happened. Under Bush, Russia invaded Georgia. Under Obama, Russia took Crimea. Under Biden, Russia invaded Ukraine. I stand as the only president of the 21st century on whose watch Russia did not invade another country.”

I have no doubt that President Putin made his decision to ruthlessly attack Ukraine only after watching the pathetic withdrawal from Afghanistan, where the military was taken out first, or soldiers were killed. And American hostages plus $85 billion worth of the finest equipment anywhere in the world were left behind.”

Referring to his previous comments that Putin is smart, Trump, said, “Yes, he’s smart. The NATO nations, and indeed the world, as he looks over what’s happening strategically, with no repercussions or threats whatsoever, they’re not so smart. They’re looking the opposite of smart.”

“The problem is not that Putin is smart, which of course he is, but that our leaders are dumb — they so far allowed him to get away with this travesty and assault on humanity.

“Putin is playing Biden like a drum, and it is not a pretty thing to watch, and it would have been so easy for me to stop this travesty from happening.”

“But with respect to what’s going on now, it would have been so easy for me to stop this travesty from happening. He understood me. And he understood that I didn’t play games, this would not have happened. We talked about it. And he did have an affinity, there’s no question about it for Ukraine. I said, never let it happen, you better not let it happen.”

“We can never really bring our country back unless we get an honest media, because they like the policing agent. And they refuse to air [Democrat] scandal they refuse to.

“It’ll be interesting to see what’s going to happen over the next three weeks or four weeks as one of the worst scandals ever. I call it the crime of the century, ballot harvesting, as it gets released. And it’s all on tape. It’s all on tape. And True the Vote. I want to thank those incredible women for their job, Katherine and all of them, for the job they’ve done. But that’ll be released first. Everything is on tape. Even the pictures are taken up the people stuffing the ballot boxes because without the pictures, they don’t get paid. And we’re talking about hundreds of 1000s of votes in each swing state.”

The most rousing standing ovation came in response to Trump’s criticism of the Canadian’s government’s suppression of the Trucker protest:

“What we have witnessed in Canada in recent weeks should shock and dismay people all over the world. In an advanced Western democracy, that peaceful movement of patriotic truckers, workers and families protesting for their most basic rights and liberties has been violently put down.

“Their assets and life savings have been frozen. They have been slandered as Nazis, racist terrorists. These are the names they’ve been called. They’ve been arrested and charged with phony crimes. They’ve been falsely accused of loyalty to foreign powers.

“I watched them I saw those Maple Leafs all over the flags and the love for their country, or even Americans when they love our country. They’re being hunted down like enemies of their own government and treated worse than drug dealers and murderers or rapists. A line has been crossed. You’re either with the peaceful truckers, or you are with the left wing fascists and that’s what’s been happening. And it’s been a strong line. We stand with the truckers and we stand with the Canadian people in their nose to reclaim their freedom.”

“The Radical Left is trying to replace American democracy with woke humanity they want to do the same thing to America that Trudeau has been doing to Canada and much, much worse.”

Returning to American politics, Trump reanimated the crowd with a litany of left-wing political wrongdoing and a fearlessness to fight:

“Our mission in 2022 and in 2024, is to take on this radical and power hungry ruling class and to deliver them an electoral defeat, so resounding that they are exiled into political oblivion. Never ever to return again.

“Joe Biden Chuck Schumer and crazy Nancy Pelosi are the sinister faces of this corrupted, lawless political establishment. They enrich their families in Ukraine, China, Russia while they shutter your small businesses right here at all.

“They send young Americans to fight and die for the borders of distant foreign nations while they throw our borders open to illegal foreign invasion.

“They said violent criminals loose without charges while prosecuting their political opponents for fabricated crimes. They legalized mass robberies and cheer for BLM and Antifa rioters ransack in our cities while they hold nonviolent protesters without trial destroy their lives.

“They indoctrinate your children to hate their parents, while calling you a hateful racist. They stick the FBI on mother’s at school board meetings while they teach four year olds to pick their own genders. Would you like to change your gender? And they say it’s absolutely fine for a boy or man to participate in women’s sports.

“They rigged elections to disenfranchise you, destroy you and ruin your lives. I’ve seen the anger and the hatred and the horror at the 2020 election all the while they claim is they’re the ones defending democracy. They say they are the ones that are going to defend your democracy and your justice.

“It’s a lot of bullshit that’s what it is.

“We will defeat this corrupt political establishment We will save our republic and we will restore constitutional government of, by, and for the people. The Washington swamp knows that we are coming to break their grip on power forever. That is why they are so desperate to stop us.  They will go to any length.