The Democrat majority in the Nevada Senate on Sunday approved legislation to implement a majority vote by mail election in November.

Assembly Bill 4 passed by a 13-8 vote, with no Republicans voting in favor. Democrats insisted the bill was necessary due to coronavirus concerns. 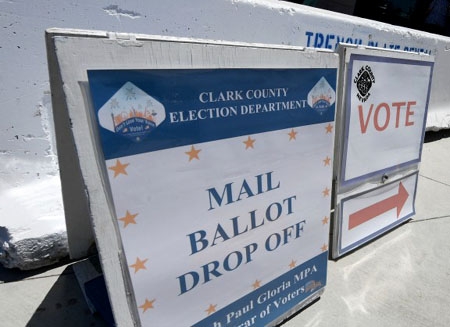 “In an illegal late night coup, Nevada’s clubhouse Governor made it impossible for Republicans to win the state. Post Office could never handle the Traffic of Mail-In Votes without preparation. Using Covid to steal the state. See you in Court!”

Trump was referring to Democrat Nevada Gov. Steve Sisolak, who is expected to sign the bill that will pave the way for mail-in ballots to be sent to all active voters in the state.

Nevada, New Hampshire and Minnesota are states won by Hillary Clinton in 2016 that the Trump campaign thinks the president could win 2020.

Polling places will still be open on Election Day in Nevada.

“I am deeply concerned by the precedent the Nevada Assembly has set for permanent universal vote by mail with the passage of AB 4. When this issue first arose at the very outset of the uncertainty surrounding the global pandemic, politicos assured those concerned with election integrity that expanded vote by mail would only impact the primary,” Engelbrecht said.

“Fast forward a few months and our worst fears have been confirmed: they are seeking to implement universal vote by mail for the general election too. Those who think this is only a temporary change to address the risks surrounding COVID are sorely mistaken. This is a step that the extreme left has fought to enact for years, and most assuredly will try to expand it to future elections, making it a permanent fixture of Nevada election law in the long term — the same thing they are fighting for in states all over the country.”

Engelbrecht added: “While advocates of universal vote by mail claim that it will bring an end to voter disenfranchisement, nothing could be farther from the truth. Vote by mail — beyond limited absentee voting — in fact further disenfranchises minorities who tend to move much more often than the general population and whose addresses are rarely kept up to date on the voter rolls.”