In striking down the 2013 North Carolina law, a panel of three Democratic-appointed judges on the U.S. 4th Circuit Court of Appeals said the law was passed with discriminatory intent and said that the “provisions target African-Americans with almost surgical precision.” 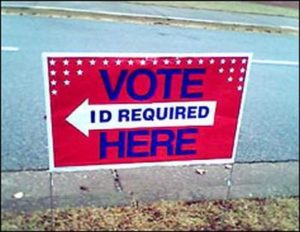 “You don’t have to have voter ID to now go in and vote and it’s a little bit scary and I’ve heard a lot of bad things,” Trump told Fox News on Aug. 2. “I mean people are going to walk in, they are going to vote 10 times maybe.

“Since today’s decision by three partisan Democrats ignores legal precedent, ignores the fact that other federal courts have used North Carolina’s law as a model, and ignores the fact that a majority of other states have similar protections in place, we can only wonder if the intent is to reopen the door for voter fraud, potentially allowing fellow Democrat politicians like Hillary Clinton and (North Carolina Attorney General) Roy Cooper to steal the election. We will obviously be appealing this politically motivated decision to the Supreme Court.

“The voter ID law ensures any North Carolina citizen who wants to vote will have that opportunity. The law establishes a list of valid government-issued photo IDs that voters can present at their polling places, allows anyone without a photo ID to obtain one at no cost through the Department of Motor Vehicles, and allows anyone who still has difficulty obtaining a valid ID to fill out a reasonable impediment affidavit and still have their vote counted. It also brings North Carolina into the mainstream of other states on matters of same-day registration and out-of-precinct voting.”

Civitas Institute President Col. Francis De Luca said that the ruling opens the door for local election boards to write voting policies for political gain, which he said was evident in the 2008 election. Civitas is a conservative think tank based in Raleigh.

“The court, by throwing out the 2013 law, in total has now allowed local board of elections to be completely political, like they were in 2008,” De Luca said. “Because in 2008 (some local boards) were very selective with one-stop voting sites. In fact in Cumberland County they opened one that was right next to [a Barack Obama] campaign rally in 2008. That was where they used the law for completely political purposes, they didn’t have other sites open in the county, they opened it on a Sunday near an Obama rally.

“So all now the 100 Republican-controlled county boards of elections can be just as political with it. Remember it’s partisan politics, its not racial or anything. These are about winning elections, and since in 2008 Democrat-controlled boards used it to help them win elections, there is nothing preventing county boards from doing the same thing, unless the Fourth District wants to come in and run every county board of elections themselves.”