Trump: Military service members fired over vaccines should be rehired with back pay

Members of the military who were fired for refusing to adhere to the Pentagon’s Covid vaccine mandate should be reinstated and given back pay, former President Donald Trump said. 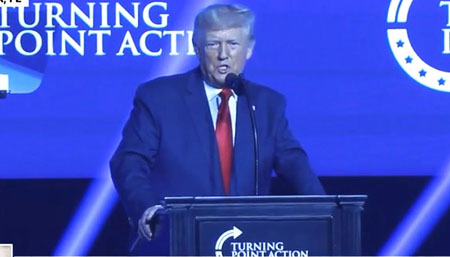 “We have to abolish all Covid mandates and lockdowns. Rehire every patriot who was shamefully fired from the military, with an apology — we have to give them an apology. And all of their back pay,” Trump said in addressing Turning Point USA’s Student Action Summit in Tampa, Florida on Saturday.

Since Team Biden’s Pentagon mandated the Covid vaccine for all military service members more than 60,000 soldiers in the Army National Guard and Army Reserves have been barred from their military duties, according to Military.com.

In February, the Army announced it would begin separation proceedings for soldiers who outright refuse to receive the coronavirus vaccine.

Trump, who polls show is well-positioned to win a second term if he runs for president in 2024, slammed “woke’” cultural policies targeting the military.

“You hear all about the woke stuff… I think a lot of our military laugh it off, but at some point it really gets in there, you get infected, and it’s bad,” he said.

While Trump backs the vaccine, he has emphasized that it should be voluntary.

Trump: Military service members fired over vaccines should be rehired with back pay added by Editor Two on July 25, 2022
View all posts by Editor Two →