While some pundits see a clash of egos ensuing in President-elect Donald Trump’s Cabinet, optimists believe the new administration will be, as designed, a coming together of a determined team of titans.

Julian Zelizer, a presidential historian at Princeton University, said Trump is building a Cabinet in his own image: blunt-talkers with real-world experience. 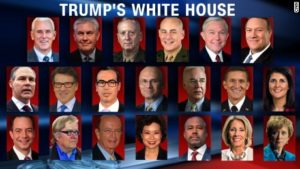 “Surrounding yourself with military guys and money guys sends a certain message,” Zelizer said. “A certain kind of cutthroat aggressive dealmaker” is how Trump sees himself.

President Barack Obama filled his Cabinet with experienced D.C. technocrats in 2008, including Hillary Clinton as his secretary of state. Robert Gates, who served the previous administration, remained at the Pentagon, and Obama made longtime Justice Department official Eric Holder attorney general.

“Trump’s roster of agency heads and advisers conspicuously lacks intellectuals, lawyers, and academics of the sort sought by some past presidents. In their place are titans of business and finance from the likes of Exxon Mobil and Goldman Sachs and no fewer than three retired generals in key positions,” James Oliphant and Emily Stephenson wrote for Reuters on Dec. 17.

Those with a high level of familiarity with Trump’s picks believe they will more than rise to the challenge.

Rep. Tom Price, Georgia Republican and Trump’s choice to lead the Department of Health and Human Services, is “decisive by nature,” said fellow Republican lawmaker Tom Cole. He credited Price’s career as a surgeon, which is also the former profession of Ben Carson, Trump’s choice for secretary of housing and urban development.

Carson, said Henry Brem, a neurosurgeon who worked with Carson at Johns Hopkins Hospital in Baltimore, has a “cool head” and is unafraid to give strong opinions. “He’s a gentleman, he speaks his mind, he has great ideas – and nobody in the world intimidates him.”

Rick Perry, Trump’s choice for energy secretary, served three terms as governor of Texas and had to “balance a very conservative and increasingly ideological grassroots (support base) with a very influential business community,” said James Henson, director of the Texas Politics Project at the University of Texas at Austin.

The Reuters report noted that “several of Trump’s picks have never held any sort of government post and have little, if any, background in policy-making,” including (secretary of state nominee Rex) Tillerson, Treasury nominee Steven Mnuchin, a Goldman Sachs alumnus, Commerce pick Wilbur Ross, a billionaire investor, and Gary Cohn, the Goldman Sachs executive who would chair Trump’s economic council.

In 2008, Mnuchin purchased IndyMac, a lender that failed during the financial crisis and helped transform it into OneWest, now a thriving retail bank in southern California.

Those with high-level corporate experience are used to having to please shareholders, board members, employees, and the community, Kelly said. “It takes a very precise and dedicated person to deliver across those constituencies.”

“The incoming Trump administration is poised to undo as much of President Barack Obama’s accomplishments as possible, while also attempting to advance a conservative policy agenda in areas such as taxes and healthcare,” Oliphant and Stephenson wrote.

Many of Trump’s choices “are people used to getting their way but will now have a boss to answer to – Trump – while navigating the sometimes frustrating and sprawling bureaucracy of the U.S. government.”