Trump in Michigan: Nation on the brink; Only your vote ‘can stop it’ because ‘they cheat like hell’

During a massive rally in Macomb County, Michigan on Saturday, former President Donald Trump declared a national emergency and said the only course correction for the damage Joe Biden has wrought with increased inflation, crime, illegal migration and instability in the world is to elect Republicans in the 2022 midterms. 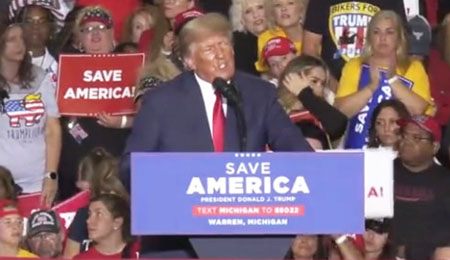 “The choice in this election is simple: If you want the decline and fall of America, then vote for the radical-left Democrats,” Trump said.

“We have a nation, as they say, in decline. If you want to stop the destruction of our country and save the American dream, you must vote Republican.”

“Every freedom-loving American needs to understand, the time to stand up to this growing tyranny is right now,” he added. “You don’t have time to waste.”

“Six weeks from now, the people of Michigan are going to vote to fire your radical-left Democrat Gov. Gretchen Whitmer, and you’re going to send a very good person — a very, very good woman — Tudor Dixon to the governor’s mansion,” he told the crowd at Macomb Community College.

Trump also said he thinks Democrats want to put him behind bars, calling himself “their No. 1 target.”

America-first, Donald Trump, Save America, Trump in Michigan: Nation on the brink; Only your vote ‘can stop it’ because ‘they cheat like hell’, WorldTribune.com

Trump in Michigan: Nation on the brink; Only your vote ‘can stop it’ because ‘they cheat like hell’ added by Editor Two on October 2, 2022
View all posts by Editor Two →