[Actual speech in video below starts at about 1:20] 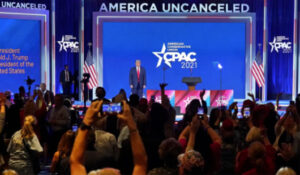 “Our focus is certainly not on what President Trump is saying” at CPAC, White House spokeswoman Jen Psaki said yesterday to reporters. Such was the view as well of the mainstream media and polite society in the nation’s capital. The CSPAN video of the speech was showing up online as an error message online. Even the “conservative” Washington newspapers were giving it short shrift.

But for millions watching the speech live in Orlando and on television, the Trump magic was back with a gut punch to the Biden White House, the U.S. Supreme Court and all those Washington consultants who had begged the former president not to mention the dreaded term “election fraud.” President Trump was unchastened, undeterred and brimming with confidence about the future of the nation and the Republican Party

Here are a few headlines from the corporate media about the speech most of which provided little to no video or quotes.

And following are quotes from the speech, best watched in full:

At the conclusion of his speech, the former president outlined his blueprint for restoring the integrity of U.S. elections. For starters, let’s have election day, he said. “Day,” not “thirty or 45 days.”

Donald Trump asked, ‘Do you miss me yet?’ and a resounding affirmative answer rang out across the land – and became even more heartfelt in the course of the ninety minutes that followed.

Partly that was because Mr. Trump powerfully recalled the accomplishments of his time in the presidency and contrasted them with the immense damage his successor has already done to our national security, economic strength, relations with allies and adversaries and public health.

The former President also laid out his vision for restoring an America in which elections are once again free and fair, our borders secure, our economy vibrant, our enemies deterred and our God-given, constitutionally guaranteed freedoms intact.

The video below begins with a tribute to Rush Limbaugh and the speech starts at about 1:20.