Report: Donald Trump ‘advisors’ agonize on how to get him on the Karl Rove script

The same so-called “advisors” who urged Donald J. Trump to lose quietly were apparently “agonizing” over how to keep the former president on script during his first substantial speech after the Jan. 6 riot at the U.S. Capitol. 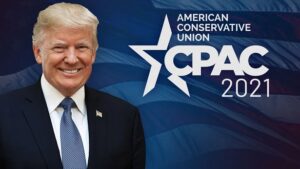 The advisors “have been agonizing for days over a puzzle no one could solve for five years: How to get him to stay on script in front of rowdy supporters cheering him on,” according to the Sunday edition of the Politico Playbook which apparently continues to thrive on leaks from Uniparty “experts”.

Those “advisors” want to keep Trump tethered to the Karl Rove script. Rove, readers may recall, could be seen on Fox News election night coverage frowning and shaking his head when Trump said the election was in danger of being stolen.

Rove’s prescription in his Wall Street Journal op-ed of Feb. 24 continued to frown on the election fraud theme and offered this instead:

There’s a second approach Mr. Trump could take Sunday. He could emphasize his agenda and contrast it with Mr. Biden’s policies starting with the new administration’s immigration proposal. He could share an expanded vision of where he would be taking America if he were still in the Oval Office, something he failed to do during his re-election campaign. He could remind people of his pre-Covid economic achievements. He could finally express compassion about those who died or suffered from Covid and declare his pride in Operation Warp Speed, which by his administration’s final week reached the daily vaccination target Mr. Biden had set for the end of his first 100 days: one million vaccinations.

In short, Mr. Trump could help his supporters overcome their frustration by offering a forward-looking program of action. He could even acknowledge Mr. Biden as the legitimate president and condemn Jan. 6’s violence. It wouldn’t hurt and could actually improve the former president’s standing.

“There are two months of pent-up tweets Trump could unleash at CPAC today,” the Playbook noted. “The risk of havoc is higher than going on Fox, which he’s done a few times.”

The “advisors” were telling Trump to go after a few enemies, such as Wyoming RINO Rep. Liz Cheney, but to essentially follow Rove’s advice, which entails not bringing up the stolen election, not standing up against those who say he was complicit in the Jan. 6 riot, and not dwelling on disputes with congressional Republican leaders Mitch McConnell and Kevin McCarthy.

Trump will be on Fox News with host Steve Hilton for an interview airing Sunday at 9 p.m.

Donald J. Trump, Report: Donald Trump ‘advisors’ agonize on how to get him on the Karl Rove script, Republican Party, WorldTribune.com