The lords of Hollywood are in full hyperventilation mode as they come to grips with the possibility that a peasant revolt will deliver Donald Trump to the White House.

The almost daily revelations coming from WikiLeaks and the FBI’s re-opening of its investigation into Hillary Clinton’s mishandling of classified information has the glitterati heading for the nearest therapist. 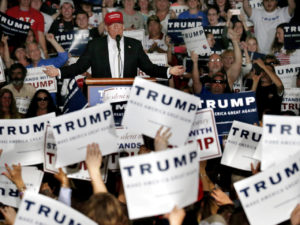 They’re losing sleep. Their tummies hurt. They are holed up in their mansions – “terrified”!

“I will be funny in December,” wrote Judd Apatow, responding to a Twitter query. “For now I am more concerned with not electing a madman who incites violence and racism.”

“I’m f—ing terrified,” said writer-director Adam McKay, via email. “If Trump were to win we will see a dismantling of our democracy we cannot imagine. I know that sounds dramatic but I think it’s a safe bet. I’m hoping silent sane Americans rise up to stamp down this ugliness. At the end of the day I still believe humans are getting better and smarter and that Trump is a burp from a bygone era.”

“We live in a bubble, I am afraid,” said producer Kevin McCormick. “Just talk to someone in Florida. It is wall-to-wall Trump ads.” He said that “everyone on both coasts I talk to, and even internationally, has a stomachache about it.”

McCormick said that he has weaned himself off what he called a “news addiction.” “I’m in my ‘don’t ask, don’t tell’ phase,” he said, adding that he’d made an exception for news stories about Trump and his ties to Russia (which The New York Times has now reported there was no link).

Norman Lear, in a piece earlier this week for the Huffington Post called “I Laughed So Hard I Started to Cry,” wrote: “Day to day, as it plays out, the political/social/economic scene invites my tears. The American people deserve so much more by way of steady, apolitical, selfless leadership than is being offered them from any direction. I could — and do — cry.

“And then, through my tears, I see Donald Trump. He’d be grotesquely hilarious, if he wasn’t so f—ng dangerous. Still, my tears do not end in laughter.”

Heather Thomas, who holds a monthly salon and political organizing gathering called LA Cafe, told Variety that she advises those who are fretting over the election that “the best way to feel better is to take action, rather than sitting around wringing your hands. That is not a very healthy position.”

Thomas also has some advice for all of the superior beings in Tinseltown who are getting too distraught over the coverage of the Clinton cartel:

“Turn off the TV, for goodness sake, and also remember that no matter what, this is still the best country in the world.”