SDF forces have been joined by several hundred local tribal fighters in battling ISIS for control of Hajin, in the Syrian province of Deir el-Zour. 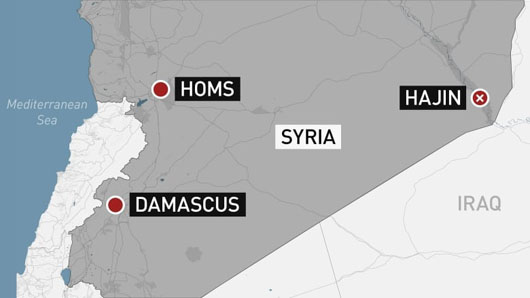 Hajin “is the last bastion for ISIS in all of Syria, and so to them this battle is a life-or-death matter,” Sadradeen Kinno, a Syrian reporter who closely follows ISIS activities in the region, told VOA. “Their so-called caliphate will literally be obliterated when Hajin has been captured. So that’s why we see most of ISIS’s fighting force is now present in this part of Deir el-Zour.”

The SDF has “brought additional reinforcements to add more pressure on [ISIS] fighters in the area,” Rami Abdulrahman, director of the U.K.-based Syrian Observatory for Human Rights, told VOA.

Abdulrahman added that the “al-Shaitat tribe, which is one of the largest Arab tribes in Deir el-Zour, has shown determination to battle [ISIS] militants.”

In 2015, ISIS jihadists killed nearly 700 male members of the al-Shaitat tribe who had refused to pledge allegiance to the terror group. Ever since, tribe members have been seeking revenge against ISIS, Abdulrahman said.

With help from the U.S.-led coalition, the Kurdish-led SDF has liberated large swaths of territory in Syria from the terror group, including its de facto capital, Raqqa.

The SDF now controls approximately one-third of Syria, making it the second-largest entity in the war-torn country, after Assad regime troops.

ISIS has been able to fend off assaults on Hajin by reportedly using civilians as human shields.

“It’s really hard for the SDF and U.S.-led coalition to carry out a full-blown operation inside the city. The coalition is already in hot water for reports of civilian deaths in Deir el-Zour,” Kinno said.

Anti-ISIS coalition officials have denied that U.S. or allied warplanes were responsible for airstrikes that reportedly killed about 60 civilians in eastern Syria, including Hajin, in mid-November.

“The long-term trend here is that Hajin will eventually be retaken from ISIS,” said Aymenn Jawad al-Tamimi, a researcher at the Middle East Forum, a U.S.-based think tank. He assessed that if and when it has been cleared from eastern Syria, ISIS would re-emerge “as an insurgent movement. I don’t think they will substantially regain territory, though.”

The American general who is preparing to take commend of the region says the end is near for the 2,000 or so remaining ISIS fighters.

“I think that we are very close to finishing the physical destruction of the caliphate,” said Lt. Gen. Frank McKenzie, President Donald Trump’s nominee to head U.S. Central Command, at his Senate confirmation hearing on Dec. 4. “I wouldn’t want to put a timeline on it, but it’s coming close.”

McKenzie, who will replace Gen. Joseph Votel, said “I think the solution in Syria that we would like to see would be a politically informed solution, where all parties have a seat at the table. But the military component of that is coming … very near to an end.”

McKenzie said of ISIS leader Abu Bakr al-Baghdadi, whose death has been rumored several times but never confirmed: “I think he’s a very scared man running for his life somewhere in the desert near the Euphrates river.”