In the realm of celebrity, where a huge Twitter following and media personalities fawning over fashionistas reign, Rep. Alexandria Ocasio-Cortez is a superstar. Arguably, she has forced Speaker Nancy Pelosi’s hand more than once.

But, when it comes to effective legislating, the New York Democrat is not even a D-lister. 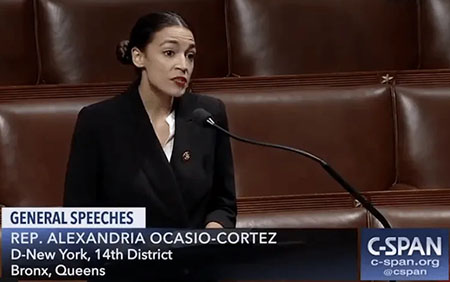 AOC was among the least effective members of the previous Congress, according to a survey from the nonpartisan Center for Effective Lawmaking, the New York Post reported on Saturday.

The study found that Ocasio-Cortez introduced 21 bills defined as “substantive,” but her legislation got no action in committees, no floor votes, and none became law. The study’s data is gleaned from Congress.gov.

“She introduced a lot of bills, but she was not successful at having them receive any sort of action in committee or beyond committee and if they can’t get through committee they cannot pass the House,” Alan Wiseman, a Vanderbilt political scientist and co-director of the center, told The Post.

“It’s clear that she was trying to get her legislative agenda moving and engage with the lawmaking process,” Wiseman added. “But she wasn’t as successful as some other members were — even among [other] freshmen — at getting people to pay attention to her legislation.”

Among the bills introduced by Ocasio-Cortez that failed were a federal overhaul of public housing, a ban on fracking, and a mandate to provide full federal public benefits to illegal immigrants.

When looking at the legislative effectiveness of all congressional Democrats, AOC ranked 230th out of 240 Democrats, the study found. Among the 19 Democrat lawmakers from New York state, she ranked dead last.

“Tweeting is easy, governing is hard. You need to have friends. You need to understand the committee process, you need to be willing to make sacrifices,” a Democrat House insider told The Post. “Her first day in Congress … she decided to protest outside of Nancy Pelosi’s office.”

A second Democratic insider who worked with her in the New York delegation added that “legislation was never her focus. It was media and narrative.”

Even other members of the so-called “Squad” of socialist Democrats fared better than AOC.