CNN, one of the top beneficiaries of what President Donald Trump called a “rigged” Google News system in favor of “fake news,” found itself once again on top of the Google News search with an Aug. 28 report – on how Google News isn’t “rigged.”

When users visited the Google News’ “Top stories” section in the United States, the top headline at least at one point on Aug. 28 was a CNN article titled, “Trump slams Google search as ‘rigged’ — but it’s not”. 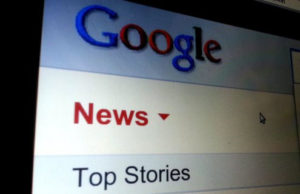 Trump called out Google Tuesday after a report earlier this week showed how a Google News search for the term “Trump News” returned overwhelmingly negative articles from left-leaning outlets, with CNN being the most linked news outlet.

“Google search results for ‘Trump News’ shows only the viewing/reporting of Fake News Media. In other words, they have it RIGGED, for me & others, so that almost all stories & news is BAD,” the president Tweeted.

“Fake CNN is prominent. Republican/Conservative & Fair Media is shut out. Illegal? 96% of results on ‘Trump News’ are from National Left-Wing Media, very dangerous. Google & others are suppressing voices of Conservatives and hiding information and news that is good.”

Researchers for CanIRank concluded in a recent study that Google’s “ranking algorithms aren’t designed to provide a fairly balanced or completely honest representation of controversial issues.”

CanIRank, which produces SEO (search engine optimization) software for websites, said that while Google “would like to portray itself as a fair and balanced arbiter of facts – a role it has recently tried to strengthen with the launch of a fact checking mechanism – searchers should be aware that ranking algorithms don’t currently incorporate an assessment of political bias or even factual accuracy.”

To assess the “political slant,” the researchers used politically active individuals from both the left and right as well as special software.

Along with finding that search results are 40 percent more likely to lean left, 16 percent of political keywords contained no conservative-leaning pages at all within the first page of results.

The analysis concluded that “factors within the Google algorithm itself may make it easier for sites with a left-leaning or centrist viewpoint to rank higher in Google search results compared to sites with a politically conservative viewpoint.”

Another recent report, this one by Information Liberation, revealed bias against conservatives in YouTube’s new search algorithm.

When searching for a particular YouTube video by it’s exact title, the report showed that similarly themed videos from mainly left-leaning media sources were ranked above the titled video.

Information Liberation said the video used to test this was a clip of conservative commentator Ann Coulter’s recent appearance on C-Span which was titled “How Trump Should Deal With Cohen & Manafort – Ann Coulter”.

When this exact title was placed into YouTube’s search function, 22 other videos were listed ahead of Coulter’s C-Span clip. The other videos related to Cohen and Manafort were published by the likes of CBS, MSNBC, CNN and the Washington Post.

In the clip of Coulter referenced in the article, the conservative author discusses the issue of censorship by tech companies, saying: “We need to apply the First Amendment to social media companies like Twitter, Facebook, and Google, because it is a public square, and there is precedent for that and it’s gotta be done, because this is really terrifying, and talk about chilling speech when they’re just throwing people off right and left.”

Breitbart News noted that the change in YouTube’s algorithm “would appear to back up reports from Breitbart’s ‘Rebels of Google’ interview series in which former and current employees stated that there were active efforts within Google and specifically YouTube to demote conservative content.”

Following the reports, economic adviser Larry Kudlow said the Trump administration would be “taking a look” at regulating Google.