Too late: Win for President Trump in Michigan on verifying ballots

Michigan’s Democrat secretary of state violated state law in the 2020 election when she issued “guidance” on the evaluation of absentee ballots, a judge ruled last week. 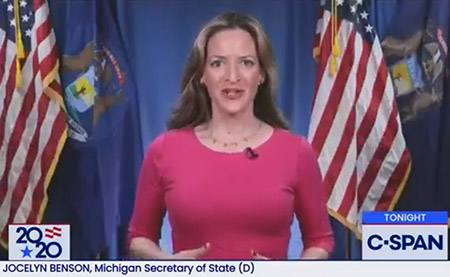 The judge said Benson did not go through the proper rule-making process when issuing the guidance and that clerks do not need to comply with it for future elections.

“The presumption is found nowhere in state law,” wrote Murray. “The mandatory presumption goes beyond the realm of mere advice and direction, and instead is a substantive directive that adds to the pertinent signature-matching standards.”

Writing for TownHall.com, columnist Matt Vespa noted: “It’s too late now, but vindication came to one of the Trump campaign election violation claims lobbed after Election Day. The Michigan courts ruled that Secretary of State Jocelyn Benson overstepped her authority when she issued unilateral changes for absentee ballots in the state. It all centered on voter signature verification. If she wanted to do that, she was going to have to get the state legislature’s approval. There was a reason why she didn’t pursue this route: Michigan’s state legislature is majority Republican. So, she took this for a spin, and it worked. The Trump campaign’s claim was vindicated, but the damage is done.”

Michigan is one of six states where Trump and his surrogates alleged widespread voter fraud in the 2020 presidential election, costing him a victory. Republicans have argued that Article II of the Constitution requires election rules to be decided by state legislatures and not elected officials.

“It was clear from the outset that the secretary of state had violated Election Law by unilaterally directing local clerks to ignore their statutory obligation to compare absentee ballot signatures,” said Ted Goodman, communications director for the Michigan Republican Party.

The Administrative Procedures Act (APA) requires state agencies to go through months of public notices, drafts, impact analyses, public comment and public hearings, which the judge ruled Benson did not do.

“Policy determinations like the one at issue — which places a thumb on the scale in favor of a signature’s validity — should be made pursuant to properly promulgated rules under the APA or by the Legislature,” Murray wrote.

Vespa noted: “We all know Democrats play dirty. I think we underestimated how low they would go and didn’t plan for every possible scenario in that regard. We just have to swallow the defeat, but also learn to play dirtier when the time comes. Win at all costs — no matter what. This is a new era, folks. Yet, this ruling also brings into question whether Biden truly received over 80 million legal votes. I’m not so sure. I would heavily bet against that.”

This happened in many states. https://t.co/oDAwxfYrQS