A UK-based group of leftist climate activists has been slashing and deflating the tires of SUVs in cities in the United States, Europe, and Oceania.

The Tire Extinguishers say it sending operatives across the globe to the slash the tires of these vehicles to protest the effects the leftists claim the vehicles have on the environment and climate change. 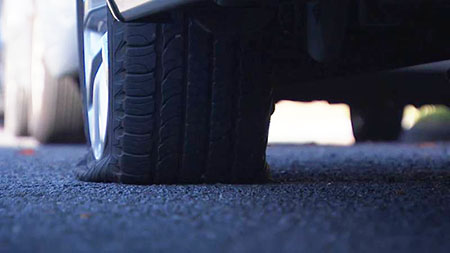 The tire terrorists say they have deflated 40 tires in New York, 23 tires in San Francisco, 20 tires in Chicago, 80 tires in Gothenburg, Sweden, and 195 tires in London, according to the Daily Mail.

The Tire Extinguishers website encourages people to submit reports of themselves slashing tires and offers instructions and leaflets to go after random parked SUVs.

The leftist activists don’t only worry about gas-guzzlers, however, as they target electric and hybrid SUVs as well.

“We need emergency action to reduce emissions immediately,” one of the group’s leaflets reads. “We’re taking actions into our own hands because our governments and politicians will not.”

A report by 1News in New Zealand noted that a vehicle in Wellington which had its tires deflated by the group was nearly involved in a crash.

1News contacted Tire Extinguishers for comment, asking if the group had considered the possibility their actions could result in an accident leading to injury or death.

Their email response was unrepentant: “The real danger is from SUVs contributing to the climate crisis, in which millions of people are dying or will die. The Tire Extinguishers want to see bans on SUVs in urban areas, pollution levies to tax SUVs out of existence, and massive investment in free, comprehensive public transport. But until politicians make this a reality, Tire Extinguishers action will continue.”

The group’s website explains why it targets SUVs specifically, calling them a “disaster for our health, our public safety and our climate.”

“Bigger and bigger cars are dominating our towns and cities, and all so a privileged few can flaunt their wealth,” the website reads. “Because governments and politicians have failed to protect us from this danger, we must protect ourselves.”