According to Team Biden and Virginia gubernatorial candidate Terry McAuliffe, parents don’t know best when it comes to the education of their children.

Biden Education Secretary Miguel Cardona said as much on Thursday in an exchange with Indiana Republican Sen. Mike Braun. 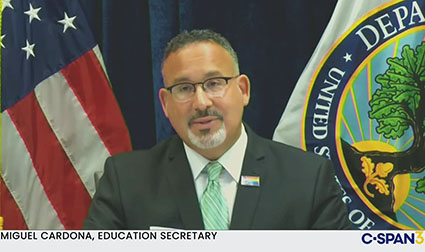 During a hearing of the Senate Committee on Health, Education, Labor & Pensions, Braun asked Cardona: “Do you think parents should be in charge of their child’s education as the primary stakeholder?”

“I believe parents are important stakeholders,” Cardona began. Braun noted that he had asked if the parents are the “primary” stakeholders. Cardona continued: “But I also believe educators have a role in determining educational programming.”

“I think that’s going to be a little out of focus,” Braun said. “I think you’re going to find, across all elements of education, since they pay the bills, raise the kids, they probably need to be the primary spokespeople for their own kids.”

Braun during the Senate hearing had also raised the issue of parents expressing anger and frustration at local school board meetings over mask mandates and Critical Race Theory curriculum.

“I think that’s civic engagement,” the senator stated, adding he had been on a school board for ten years.

Braun said he was “a little disturbed” at a comment Cardona made about why parents are asserting themselves at school board meetings.

“I think it’s a proxy for being mad that their guy didn’t win,” the senator quoted Cardona, and then asked the secretary if he might like to retract that statement.

Cardona responded: “I know that across the country our school board meetings are a little bit more intense, but I’ll tell you school boards are unwavering in their support for returning students to school and providing a safe learning environment.”

Braun pressed further: “What about the statement? … Would you want to take that back, to not politicize something where I think it’s an honest, sincere difference of opinion across the country, and I don’t know that I’d want to be on record with that.”

Cardona responded: “Senator, I’ll tell you, the lack of civility in some of our meetings is disappointing and frustrating, especially because our superintendents and educators and board members and, you should know, you were a board member, they’ve worked tirelessly over the last 18 months to provide a safe environment.”

Braun said: “I’ll take it that you don’t want to retract it at this point.”

Cardona’s refusal to say that parents are the primary stakeholder in their kids’ education came after Virginia Democrat gubernatorial candidate Terry McAuliffe said during last week’s debate with Republican Glenn Youngkin that “I don’t think parents should be telling schools what they should teach.”

In response to Youngkin’s criticism of his past decision to veto a bill that would have allowed parents to remove controversial books from their school libraries, McAuliffe, the former governor, said, “I’m not going to let parents come into schools and actually take books out and make their own decisions.”

Youngkin asserted, “I believe parents should be in charge of their kids’ education.”

Sean Parnell, Republican candidate for U.S. Senate in Pennsylvania, tweeted in response to McAuliffe’s comment: “For a moment McAuliffe showed you what he really believes & it should frighten every parent. The reality is, all radical leftists think this way. They believe they know what’s best for you & your children. They want total government control over every aspect of your life.”

§ 1-240.1. Rights of parents.
A parent has a fundamental right to make decisions concerning the upbringing, education, and care of the parent’s child. https://t.co/0EDigYoCze pic.twitter.com/shFwGDg8Lf