A propaganda film extolling the greatness of George Soros is getting a splashy online release in the immediate wake of the Big Election Steal of 2020 and an examination of its creators reveals intimate ties to a dizzying array of powerful leftist and establishment forces.

The “documentary,” titled simply Soros, was made in 2019. It will be available for online streaming Nov. 20, right as the presidential election fraud controversy that has engrossed the nation continues to roil. 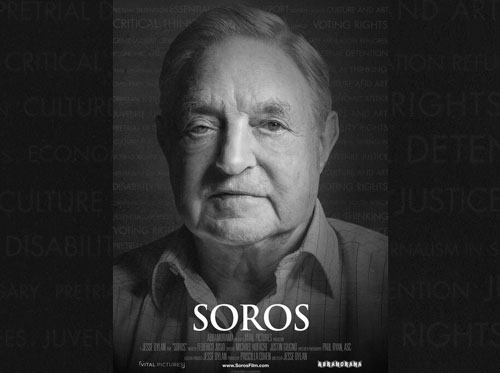 Jesse Dylan is highly placed within the halls of institutional leftist power. He directed the popular 2005 Hollywood comedy Kicking and Screaming and gained renown for making a music video with rapper will.i.am to support Barack Obama’s 2008 campaign for the presidency titled Yes We Can. The video “received over 26 million views within a matter of days,” Ad Age related in a 2012 article that called it one of the “Top 10 Game-Changing Political Ads of All Time.”

“It’s a battle of ideas at the most fundamental level,” a speaker proclaims in a trailer for Soros posted onto YouTube. Dylan is an unabashed admirer of the globalist progressive multibillionaire. In a “Director’s Statement” on the film’s official website, he declares:

[A]s a filmmaker, I felt it was imperative to put the truth out there about who he is and all that he stands for. With extremism on the rise across the world, we have witnessed George become a target of conspiracy theories. So now more than ever, his story has to be told. It’s not always obvious how to be a good person in society or how to achieve progress, but you cannot sit on the sidelines. You have to act. George is one of the biggest actors for good the world has ever known.

Media material for the film further paints Soros as a modern-day hero. “Soros reveals a complicated genius whose experience as a Jew during the Holocaust gave rise to a lifelong crusade against authoritarianism and hate,” a press kit states.

Wondros is the name of the “global creative agency” founded by Jesse Dylan. Former Geffen Pictures Vice President Priscilla Cohen is its Chief Creative Officer. Her LinkedIn page shows her to be a stunningly connected player with ties to a slew of powerful globalist progressive and corporate organizations:

Priscilla Cohen is the chief creative officer at Wondros, a full-service production company with a focus on content that fosters social responsibility. Along with director and founder Jesse Dylan, she has been a force behind some of the most successful campaigns in commercial television, print, and interactive advertising.

Her work focuses on telling the stories of some of the world’s most innovative projects, people, and organizations, including George Soros and The Open Society Foundations, MD Anderson Cancer Center, The Council on Foreign Relations, The Clinton Global Initiative, The Gates Foundation, The Guggenheim Museum, The Sundance Institute, The California Endowment, TED, The Getty Foundation, ONE, (RED), MIT Media Lab, Vanity Fair, IBM and many others.

She became a film Executive at companies including Miramax, Geffen Pictures and Robert Redford’s Wildwood Productions, where she was integral to the development of Oscar winners “A River Runs Through It” and “The Cider House Rules”, as well as “Interview with the Vampire.”

The Cider House Rules was a major Hollywood film released in 1999 to stealthily promote abortion. As a reviewer at the staunchly liberal Jesuit website America noted at the time:

The film has received seven Academy Award nominations. What’s more, the national president of Planned Parenthood is delighted with the film. Referring to the anniversary of Roe v. Wade, Gloria Feldt said, “The timing of this release couldn’t be better.” Planned Parenthood plans to host “private screenings, fundraisers, and discussion groups led by local film critics,” all with the goal of “reminding viewers of the threats to reproductive choice.” I have even heard members of the pro-life movement pronounce it “a beautiful movie.” I’ve heard no one describe it as cynical or pernicious. It is both.

Jesse Dylan is a member of the globalist Council on Foreign Relations. Even more disturbing, he is also a member of John Brockman’s Edge Foundation. Disgraced elitist pedophile Jeffrey Epstein bankrolled Edge to such a vast extent that literary agent Brockman has been labeled Epstein’s “intellectual enabler.” Leftist publication The New Republic said of Brockman:

Epstein participated in the Edge Foundation’s annual questions, and attended its “billionaires’ dinners.” Brockman may also be the reason why so many prominent academics—from Steven Pinker to Daniel Dennett—have found themselves answering awkward questions about their associations with Epstein; they are clients of Brockman’s. Marvin Minsky, the prominent MIT scientist who surfaced as one of Epstein’s island buddies? A client of Brockman’s. Joi Ito, the director of the elite research facility MIT Media Lab, who has recently acknowledged extensive ties to Epstein? Also, a client of Brockman’s.

There’s more: A close analysis of Edge Foundation’s (publicly available) financial statements suggests that, between 2001 and 2015, it has received $638,000 from Epstein’s various foundations. In many of those years, Epstein was Edge’s sole donor.

In 2014 Dylan made a short documentary film for Edge. In 2015 he was pictured alongside Google co-founder Larry Page at the foundation’s annual “Billionaires’ Dinner.”

Biden’s cancer-fighting organization closed down when he announced his run for the presidency in 2019. It was awash in ethics controversies, including allegations of having excessively cozy Big Medicine ties. The overtly pro-Democrat Associated Press reported in July 2019 that:

In January 2018, Biden spoke at a San Francisco conference sponsored by a health tech firm whose chief medical officer is Biden’s son-in-law, who was also on the Biden cancer nonprofit’s board. During that speech, Biden also hailed a medical device entrepreneur who has helped raise funds for Biden’s campaign. Both firms lobby with the federal government.

World Tribune has reported on how easy it is to uncover prominent Soros agents among the Biden-Kamala Harris fold. It appears Democrats are rapidly becoming willing to publicly acknowledge Soros’s leading role within the party.

Cecilia Munoz, a former longtime Obama administration staffer, is Advisory Board Chair for Soros’s Open Society Foundations. Far from ducking any connection with Munoz, Obama publicly praised her in an April tweet that served as a pitch for a new book she authored:

My advisor and friend @cecmunoz has been someone I’ve turned to for years. In her new book, More Than Ready, she shares her story and an empowering message to women, especially women of color, that they are the leaders we need to make a change in our world. pic.twitter.com/6bQski6N23

In order to get Americans to accept the shenanigans of this election season, Democrats know they must get them to accept George Soros and his shadowy activities. Films like Soros are meant to do just that.