The sins of Tom Brady: The Boston Globe wants you to know he’s deplorable

The liberal media owes Tom Brady an apology. For nearly the past year, the New England Patriots star quarterback has been relentlessly criticized by left-wing journalists and sports talk-radio hosts, especially in Boston.

Brady’s alleged crime: He supports President Trump. That’s right. Brady, for simply expressing his backing for the man who won the election — and who is also a close personal friend — has earned the opprobrium of the politically correct Left.

Leading the pack is the Boston Globe. 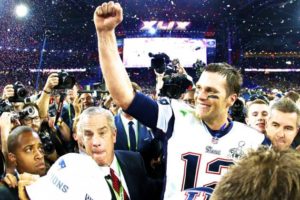 A recent article titled, “All the President’s Men — Kraft, Belichick and Brady,” summed up the liberal indictment: Patriots’ owner, Robert Kraft, their coach, Bill Belichick, and Brady should be ashamed for having cast their votes for Trump.

Why? Because Trump is allegedly a racist, sexist, xenophobic, Islamophobic and homophobic bigot. Others, such as the popular sports talk-show, “Felger & Mazz,” have condemned Brady because he refuses to “own up” his support for Trump. They argue that the Pats QB owes it to the public to discuss the reasons for his support of Trump, and that his refusal to do so during numerous press conferences is “cowardly” and craven.

Only in Massachusetts could a quarterback who happened to vote for the Republican winner in the presidential election be labelled a political extremist.

It’s no coincidence the Globe ran an early edition fake headline that the Pats lost in the Super Bowl. Consumed by their hatred for Trump and by extension Brady, the moonbats at the Globe couldn’t even wait for the Atlanta Falcons to have actually won before gloating over the Pats’ supposed demise.

Moreover, Brady owes the liberal media no explanation for why he backs Trump.

The reason: it is none of their business.

America is still a free country. Citizens, including professional athletes, have the right to vote for the candidate of their choice. And if they don’t want to discuss their politics, that is also their right. It’s called the First Amendment. What the Left is trying to do is shame and humiliate Brady simply for supporting Trump. It is censorship and liberal authoritarianism masquerading as inquisitive journalism.

What Brady does owe, however, is his professional obligation to perform at his very best, which he did brilliantly on Sunday and as he has so often throughout his career.

A major problem with our society is the growing politicization of American life. Pop singers, Hollywood actors, celebrity athletes — Americans are rightly sick of spoiled, ignorant multimillionaires constantly lecturing us and delivering endless rants about their political views. People turn to sports, music or entertainment not to hear about politics but to escape it.

It’s one of the key reasons why ESPN, for example, is tanking in the ratings. The sports network is often more interested in discussing the glories of transgender bathroom rights or the (deeply racist and hate-infested) Black Lives Matter movement than in actual sports.

Brady is paid — and paid handsomely — to throw touchdowns, not to be a political pundit. If Colin Kaepernick understood this maybe the 49ers wouldn’t be so awful.

Brady doesn’t want his politics to become so all-consuming that it becomes a distraction in the locker room. Yet, liberals respond that it was the Pats QB who brought a “Make America Great Again” cap — the iconic Trump baseball cap — and placed it in his locker. By doing so, they argue he brought his political beliefs to the epicenter of the team.

Brady never —not once — wore his cap at a press conference. He never lectured his teammates to vote for Trump. He never imposed his beliefs upon fellow players or the public at large. He never went on social media and delivered rant after rant, screed after screed, telling the world why he opposes Hillary or backs Trump. In other words, he never turned the locker room into his personal soapbox.

Kaepernick did. And so has Patriots tight end, Martellus Bennett, who now says he will not be attending the White House with the rest of his team to protest Trump.

Think about this: Bennett has repeatedly on Facebook, Twitter and countless media interviews excoriated Trump as a budding fascist and praised Hillary Clinton and Black Lives Matter. The guy cannot shut up about his political views — no matter how ignorant he sounds. Yet, the liberal Boston media lionizes Bennett for his supposed “courage,” while denouncing Brady as some kind of closet racist.

The irony is there was only one real racist in the presidential election — and it was Hillary. She openly smeared Middle America — Christians, conservatives, patriots, working-class whites, veterans and rural voters — as “deplorables,” inherently vile bigots who are “irredeemable.”

She is an unindicted felon, a criminal who broke the law, compromised sensitive national security secrets, covered-up the murder of four Americans in Benghazi (including the U.S. ambassador) and used the Clinton Foundation as a slush fund to enrich herself and her husband to the tune of $250 million.

She openly praised a domestic terrorist-hate group, Black Lives Matter, that champions cop-killing and racism against whites. Hillary belongs in prison — and in a different age would probably get the electric chair.

The one who should be truly ashamed of his political views is not Brady. It’s Bennett and the rest of his liberal ilk.

There is a deeper reason, however, why liberal elites despise Brady. He embodies everything that traditional America stands for — self-reliance, hard work, patriotism, personal responsibility, competitiveness and rugged individualism. These qualities are directly at odds with progressive socialism.

Moreover, his personal story is quintessentially American: a skinny sixth-round draft pick, who nobody thought had what it takes to succeed as an NFL quarterback through sheer perseverance and talent rose to the top. Throw in a former supermodel wife, idyllic-looking family and a clean image and you have the closest thing to a real-life Captain America.

Brady’s real sin is that he symbolizes what modern liberal culture has tried to destroy: heroes. There are no more heroes in America.

Once we had George Washington, Gen. George Patton, Ty Cobb, Neil Armstrong and John Wayne (to name just a few). Today, political correctness — a euphemism for cultural Marxism — demands that old-fashioned heroes be torn down. Media leftists hate Brady because he is a white heterosexual male who happens to be a conservative. In other words, he’s simply another deplorable.

The sins of Tom Brady: The Boston Globe wants you to know he’s deplorable, WorldTribune.com