The scene at the ‘Democratic Peoples’ Republic of Chaz/Chop’: Autonomous for whom exactly?

Leaders in the anarcho-socialist utopia that has been winnowed from six to three blocks in the city of Seattle say the autonomous zone offers its denizens free food, free music, no cops, and lots of peace and love, man.

But how autonomous, and for whom, is the Capitol Hill Autonomous Zone (CHAZ)/Capitol Hill Organized Protest (CHOP)? 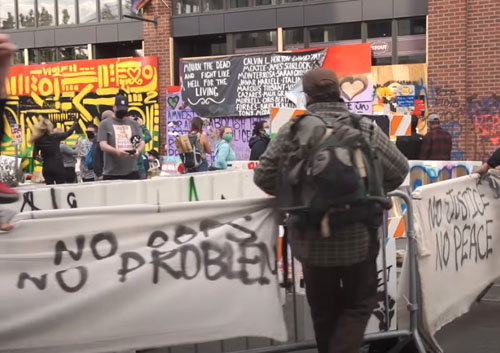 “We’re starting to see cracks in utopia already. It’s not as if this is the first time it’s been tried, after all, and this one seems to be on schedule to teach us all of the same old lessons over again,” Robert Tracinski noted in a June 17 analysis for The Bulwark.

Within the first day of the establishment of CHAZ, they were already running out of food.

The alarm went out from CHAZ leaders: “The homeless people we invited took away all the food at the Capitol Hill Autonomous Zone. We need more food to keep the area operational. Please if possible bring vegan meat substitutes, fruits, oats, soy products, etc. — anything to help us eat.”

Tracinski noted that “this is an urban area with no farmland of its own, so it’s no surprise that it is dependent on supplies from the outside. As one wag put it, how autonomous are they if they have to order in pizza?”

Some residents in the neighborhood taken over by the anarchists say access to their buildings is blocked.

“It’s a bit stressful. It’s like checking in with somebody to get into your own home,” said one resident who lives in the “Autonomous Zone.”

Seattle police officers have agreed to only enter the zone to respond to “significant life-safety issues,” according to Mayor Jenny Durkan’s office.

“While there have been inaccurate and misleading depictions of the CHOP from the President and some national media, the City believes first amendment activities can continue while also maintaining public safety and allowing access for residents and businesses who operate in the area,” the mayor’s office said in a statement.

Tracinski wrote: “This leads us to the big question about the ‘autonomous zone’: Whose ‘autonomy’ is it? Certainly, it’s not the autonomy of the people who actually live there, who did not invite the protesters and never had the opportunity to vote on whether they wanted to reject the protection of the Seattle PD and establish new protectors.”

One of the groups occupying the zone issued a statement with a list of demands including recognition that “we stand on land already once stolen from the Duwamish People, the first people of Seattle.”

But, Tracinski pointed out, “notice that it offers no recognition of the present-day residents and business owners of the district. The people who live there were never asked whether they wanted to be part of an autonomous zone run by people who don’t live there. Then again, another of the demands is ‘the de-gentrification of Seattle,’ so they have already taken upon themselves the prerogative of deciding who should and should not be allowed to live in the city.”

Residents of the Capitol Hill neighborhood also did not choose their new protectors and have no way of holding them accountable.

“This all began with complaints about ‘police brutality’ and the police being insufficiently accountable for their misconduct,” Tracinski wrote. “But now you have armed and masked men patrolling the streets and manning the checkpoints. These armed men are different from the Seattle PD in only one respect: They have no badges, no identification, no body cameras, no chain of command — no means of identifying them, recording their activity, or bringing them to account if they use excessive force.”

But aren’t these just a bunch of mellow hippies who wouldn’t harm anybody?

Tracinski noted: “Some of them are. Then there are guys like Solomon ‘Raz’ Simone, a rapper and ‘activist’ whose crew was filmed assaulting a graffiti artist because he painted over somebody else’s graffiti. Simone has been called CHAZ’s ‘warlord’. But it was his own gang who were filmed shouting, in the moments before this assault,’We are the police of this community now,’ and, ‘We are the leaders of this community now.’ Oh, yeah? Well who voted for them?”

Meanwhile, activists are asking people not to film the many scuffles breaking out in CHAZ because it might make them look bad.

“Seriously, this whole thing started because of a violent act whose perpetrators could only be held accountable because it was captured on video by a bystander’s cellphone. And now the protesters want to prevent bystanders from capturing video of violent acts,” Tracinski wrote. “And since this is all about securing the unobstructed right to protest, surely the folks at CHAZ will be respectful of the rights of dissenters who protest against them, right? Yeah, you already knew the answer to that one.”

So, the actual residents of the Capitol Hill neighborhood have no say over who runs it, who polices it, or what they are allowed to say in public. How’s that for autonomy?

Tracinski concluded: “The loudness with which CHAZ trumpets the idea of ‘autonomy’ without providing any actual mechanism for the people to control it reminds me of the old Cold War joke about how a country that has the words ‘Democratic’ or ‘People’s’ or ‘Republic’ in its name is almost certain not to be democratic, not to be a republic, and not to be accountable to the people.

“It looks like that’s a lesson we’re going to have to learn all over again from the Democratic People’s Republic of CHAZ.”

anarchists, Antifa, autonomous zone, Seattle, The scene at the ‘Democratic Peoples’ Republic of Chaz/Chop’: Autonomous for whom exactly?, WorldTribune.com