A powerful cabal led by Anthony Fauci and Bill Gates used their control over Big Media, scientific journals, government agencies, and influential scientists and physicians to flood the American public with fearful propaganda about Covid-19, a new book contends. 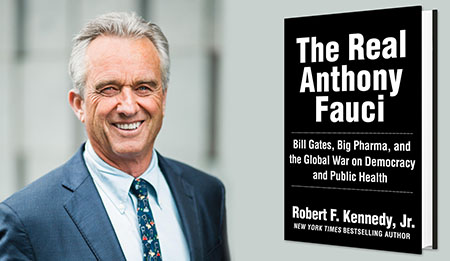 The Fauci/Gates cabal also used that power, and continues to do so to this day, to muzzle debate and censor dissent, Robert F. Kennedy Jr. notes in his new book “The Real Anthony Fauci: Bill Gates, Big Pharma, and the Global War on Democracy and Public Health“.

Kennedy, Children’s Health Defense’s board chair and lead counsel, noted: “The research I conducted for this book exposes how Fauci’s gargantuan yearly disbursements allow him to dictate the subject, content and outcome of scientific health research across the globe. These annual disbursements also allow Fauci to exercise dictatorial control over the army of ‘knowledge and innovation’ leaders who populate the ‘independent’ federal panels that approve and mandate drugs and vaccines — including the committees that allowed the Emergency Use Authorization of COVID-19 vaccines.”

“The Real Anthony Fauci” informs readers of how Fauci, Gates and their collaborators:

• Invented and weaponized a parade of fraudulently concocted global pandemics, including bird flu (2005), swine flu (2009) and Zika (2015-2016), in order to sell novel vaccines, enrich their Pharma partners and increase the power of public health technocrats and Gates’ entourage of international agencies.

• Used “gain-of-function” experiments to breed pandemic superbugs in shoddily constructed, poorly regulated laboratories in Wuhan, China, and elsewhere, under conditions that almost certainly guaranteed the escape of weaponized microbes, in partnership with the Pentagon, the Chinese military and a shady cabal of bioweapons grifters.

• Made a series of prescient predictions about the imminent Covid-19 pandemic — almost to the day. Their precision soothsaying further awed a fawning, credulous and scientifically illiterate media that treats Gates and Fauci as religious deities, insulates them from public criticism and vilifies their doubters as heretics and “conspiracy theorists.” Adulatory mainstream media abetted Fauci’s conspiracy to cover up Covid’s origins at the Wuhan lab.

• Teamed with government technocrats, military and intelligence planners, and health officials from the U.S., Europe and China to stage sophisticated pandemic “simulations” and “Germ Games.” Exercises like these, encouraged by the Global Preparedness Monitoring Board, laid the groundwork for imposition of global totalitarianism, including compulsory masking, lockdowns, mass propaganda and censorship, with the ultimate goal of mandating the coercive vaccination of 7 billion humans.