The Ratcliffe release: Now the media objects to unverified information

For the better part of three years, the major media ran with reports based on information known to be unverified in order to smear President Donald Trump.

Exhibit number one is the phony dossier, paid for by Democrats and written by ex-British spy Christopher Steele.

Paul R. Gregory of the Hoover Institution noted earlier this year: “The overwhelmingly anti-Trump media wanted the dossier to be true and ignored the obvious signs of fakery.”

Gregory added: “In less-partisan times, the winner of the media race to prove or disprove the dossier would go down in history, adorned with Pulitzers and other accolades. But these are not normal times. Reporters from the New York Times and Washington Post won Pulitzer Prizes for ‘their deeply sourced’ (read: flawed) writing on the Russian affair, while Wall Street Journal opinion writers, above all Kim Strassel, got it right, but no prize.”

On Tuesday, the major media were unified in their outrage over Director of National Intelligence (DNI) John Ratcliffe’s declassifying unverified information that Hillary Clinton in 2016 sought to distract from her email scandal by approving a plan to tie Donald Trump to the Russian hacking of the Democratic National Committee.

Politico’s piece was headlined: “Intel chief releases Russian disinfo on Hillary Clinton that was rejected by bipartisan Senate panel.” A subhead read: “Former top officials were aghast at the move by John Ratcliffe, the director of national intelligence.”

How many “aghast” officials were cited by the leftist media when Rep. Adam Schiff continually pushed Christopher Steele as reliable and his bogus dossier as accurate? Crickets.

Anchors on CNN consistently repeated false claims that the dossier had been corroborated to a significant degree.

Mother Jones itself was knee deep in spreading the mother of all unverified Russia claims, the Steele dossier. Former FBI General Counsel James Baker told Congress in October 2018 that Mother Jones journalist David Corn had delivered a version of the dossier to Baker sometime after the 2016 election. Baker said that he turned over the dossier version given to him by Corn to the FBI’s counterintelligence division.

Ratcliffe on Tuesday sent a letter to Senate Judiciary Committee Chairman Lindsey Graham in which the DNI noted that U.S. intelligence agencies “obtained insight” into Russian intelligence alleging Clinton approved “a campaign plan to stir up a scandal” against Trump.

Ratcliffe, however, cautioned that the intelligence community “does not know the accuracy of this allegation or the extent to which the Russian intelligence analysis may reflect exaggeration or fabrication.”

In a statement on the letter, Ratcliffe pushed back on the idea he was advancing “Russian disinformation.” “To be clear, this is not Russian disinformation and has not been assessed as such by the Intelligence Community. I’ll be briefing Congress on the sensitive sources and methods by which it was obtained in the coming days.”

Graham said he would review the information, noting that Ratcliffe would make it available in a classified setting.

“This latest information provided by DNI Ratcliffe shows there may have been a double standard by the FBI regarding allegations against the Clinton campaign and Russia,” Graham said. “Whether these allegations are accurate is not the question. The question is did the FBI investigate the allegations against Clinton like they did Trump? If not, why not? If so, what was the scope of the investigation? If none, why was that?”

Fox News noted that Ratcliffe’s letter “will likely add to mounting scrutiny of the DOJ’s initial investigation into Trump’s campaign and Democrats’ influence on foundational information like the Steele dossier. That probe eventually evolved into a multi-year, special counsel investigation that cost American taxpayers more than $30 milion.” 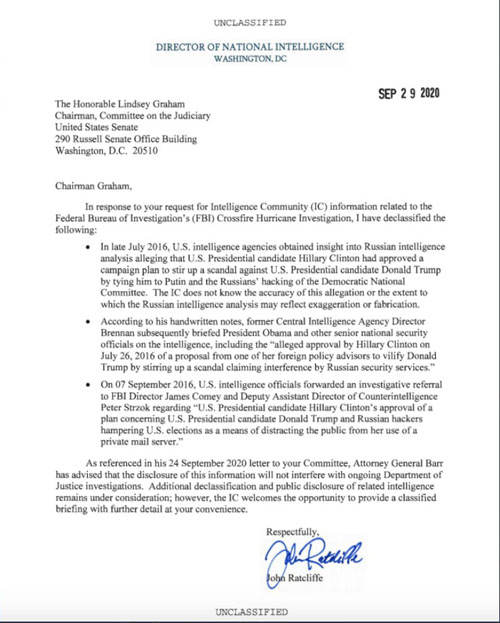