If we can get through the last of the Pundit Primaries, the actual Republican voters can get on with the business of choosing the man to liberate America from Barack Obama. But the path to presidential power is strewn with little rocks who imagine they’re mighty boulders.

The “debates”—it’s an insult to the memory of Abraham Lincoln and Stephen Douglas to call them “debates”—are actually only occasions for television moderators to parse, preen and demonstrate how little actual wit and learning you need to pretend to knowledge of public affairs. The “debates,” with their emphasis on the unimportant, have taken the selection process away from the party without actually shaping either the race or the candidates. 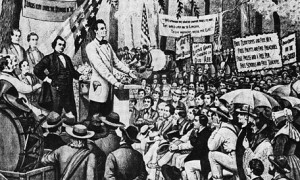 The flickering television screen, which is all about illusion, is thus allowed to define what passes for reality. The candidates get their 15 minutes of fame, which isn’t much, but it’s all most of these worthies will ever see of presidential fame.

The television talking heads who parse the answers to their questions then decide who the winners and losers are. The candidates and their handlers retire to the Spin Room at the end of the “debate” to tell their version of who won and who lost. We’ve gone through 17 “debates” so far, with two more to go, and so far the voter has not had anything to say about what’s actually on his mind. All he knows is what the pundits, pollsters and spinners tell him about what he’s thinking.

The not-so-great debates reveal mainly what the spin class is thinking added by Editor One on December 13, 2011
View all posts by Editor One →