The next really big thing: Asteroid mining said worth $700 quintillion

Several companies are building spacecraft to mine precious metals and other rare resources on asteroids. 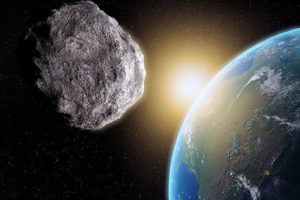 NASA estimates the value of these resources could be up to $700 quintillion – the equivalent of $100 billion for each person on Earth.

Deep Space Industries, which hopes to cash in on asteroid mining, is currently building a steam-powered thruster for spacecraft, the Guardian reports.

British company AMC (Asteroid Mining Corporation), envisions sending a very small spacecraft to mine platinum, which is common in asteroids but very pricey on Earth. AMC says it would use the platinum to finance larger space missions.

Planetary Resources is planning to send robotic vehicles to mine asteroids. The company is backed by Avatar director James Cameron.

NASA’s Psyche mission, set to launch in 2022, will set its sights on a metal-rich asteroid known as 16 Psyche. The resources that could be mined on 16 Psyche are estimated to be worth over 10,000 quadrillion dollars.

Psyche principal investigator Lindy Elkins-Tanton of Arizona State University said earlier this year that the 124-mile wide asteroid would be worth the astronomical sum “if we could somehow drag it back to Earth.”

In June 2017, Trump announced the re-establishment of the National Space Council, calling space “the next great American frontier.” In December, Trump signed a directive to “send American astronauts back to the moon, and eventually Mars,” even “perhaps someday to many worlds beyond.”

In March, Trump proposed a United States Space Force to shore up U.S. defenses on the new frontier, and in May he ordered the deregulation of space travel to pave the way for private companies to help.

“We haven’t had this kind of focused, dedicated effort,” Stallmer said in an interview on Breitbart’s Sirius XM Patriot channel 125. “I mean when, historically – not to knock previous administrations – but when you thought space, you thought NASA. well, there’s a lot more to space than just NASA.”

Stallmer added: “I think this administration, with the Vice President (Mike Pence) on the Space Council, has really recognized this, and is taking a really holistic approach to civil, commercial, and military space. we just haven’t had that kind of attention in past administrations.”