The ‘King of kingmakers’: Trump on a roll, orders GOP to Ditch Mitch

What planet was Bolton polling? 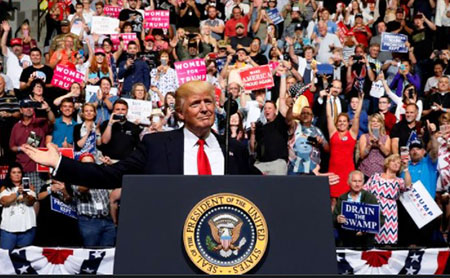 A quick scan of actual results finds that 137 candidates endorsed by Trump have won and just 3 have lost since 2020, including a 4-for-4 performance in last month’s off-year elections.

“Results don’t lie. The power of President Trump’s endorsement is undeniable,” said Zachary Moyle of SoCo Strategies. “Trump is the King of kingmakers.”

With that in mind, Trump said that it is time for the Republican Party to part ways with Senate minority leader Mich McConnell:

“Mitch McConnell is giving the Democrats victory on everything,” Trump said in a statement. “What is wrong with this Broken Old Crow? He’s hurting the Republican Senators and the Republican Party. When will they vote him out of Leadership? He didn’t have the guts to play the Debt Ceiling card, which would have given the Republicans a complete victory on virtually everything. The Dems were ready to fold! Watch, they will use the Debt Ceiling against us at their first opportunity, and they won’t fold. It will not be pretty. GET RID OF MITCH!”

To test the impact of a Trump endorsement, Moyle said he surveyed races in Wyoming, South Carolina, Florida, Georgia, and Washington and was surprised by what he found.

“What I can say is that I was pretty shocked by the high numbers. I had thought Trump would be a significant influence, but after looking at these five races, the power he wields in these primaries is somewhat unprecedented,” he said.

In four of the five states, Moyle found that Trump had a 70 percent or higher approval rating among Republicans. In Wyoming, it was 63 percent.

“Donald Trump is still the head of the Republican Party,” Moyle said.

“It appears to be very clear that even in a saturated field of candidates, there is little chance for an anti-Trump Republican to compete. Trump’s endorsement would propel most any candidate to a Republican primary victory,” he added.

The ‘King of kingmakers’: Trump on a roll, orders GOP to Ditch Mitch added by Editor Two on December 13, 2021
View all posts by Editor Two →