The greatest scandal of our time: Did a sitting American president spy on his successor?

The real story is that Obama monitored and spied on Trump. It is the greatest scandal of our time.

Over the weekend, Trump issued a barrage of tweets. He accused the former president of having monitored and conducted surveillance of Trump’s phones and computer server during the election. The allegations have sparked a public firestorm. Obama and the Democratic media adamantly deny it. 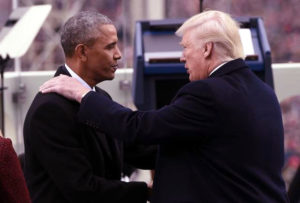 They are lying. The evidence is clear — and overwhelming.

In June, the FISA court denied the warrant application, which is almost unheard of. This is how weak and flimsy the Justice Department’s case was.

In October, however, the Obama team’s persistence paid off: A narrower FISA warrant application was approved. In other words, Obama’s Justice Department and FBI were spying on Trump and his communications. Although investigators told the New York Times that nothing suspicious was discovered (the computer server had simply been sending spam to the Russian bank), they admitted that their monitoring and surveillance activities continued.

In other words, intelligence officials were fishing for a bombshell.

The Obama administration used the claims of Trump’s ties to Moscow as a justification — a pretext — to engage in police state tactics.

This was done during the heat of an election, in which Obama openly campaigned for Hillary Clinton. He abused government powers to target a political opponent. His goal was clear: To use our intelligence agencies to dig up dirt on Trump in order to throw the election in Hillary’s favor.

Authoritarian regimes engage in state spying on political rivals, not constitutional democracies. Obama’s actions are reminiscent of the Stasi in East Germany or the KGB in Soviet Russia. They are not just grossly illegal and criminal, but strike at the very heart of our republic.

Moreover, Obama intelligence officials have also spied on Trump’s advisors and presidential transition team. For example, the New York Times and the Washington Post published a series of articles based on anonymous sources and classified leaks (which are illegal) that describe how key Trump aides, such as former campaign manager Paul Manafort, Roger Stone and Carter Page had their phone calls monitored in an alleged effort to find links to the Kremlin.

Former National Security Advisor Mike Flynn had his private conversations with Russia’s ambassador to the United States, Sergey Kislyak, recorded and transcribed. The NSA claims they were conducting surveillance on the Russian ambassador. If that’s true, it begs the question: Why did the intelligence community disclose Flynn’s identity — at the time he was a private U.S. citizen—and the substance of his phone call?

The answer is obvious: humiliate and if possible, delegitimize Trump.

In a front-page article on Jan. 20, the New York Times reported Obama intelligence officials had been engaging in a broad, sweeping “wiretapped inquiry” into the Trump team’s supposed connections to Russian strongman Vladimir Putin.

According to the Times (and the Washington Post), there was a coordinated multi-agency investigation that included the FBI, the Justice Department, the CIA, the NSA and even the Treasury Department’s financial crimes division unit. In other words, almost every key branch of Obama’s administration was spying on Trump and many of his advisors.

It is impossible that all of this government surveillance could have gone on without Obama’s knowledge or authorization. It took place because he wanted it to. He is guilty as sin — and the liberal media knows it.

The deep state, which is comprised of the intelligence community, the national security bureaucracy and its allies in the mainstream media, the establishment GOP and the Democrat Party, is in revolt. It is the permanent or shadow government, the real power behind our democratic institutions. It despises Trump because of his vow to “drain the swamp” in Washington. It is now engaged in a silent coup to drive Trump from office, hoping to overturn the November election. Its weapons are not tanks and guns, but classified leaks, illegal surveillance, rampant spying and constant lies.

The deep state is in a life-death struggle against Trump. And this can only end in two ways: Either he drains the swamp or the swamp swallows him. This is why Trump must push Congress for a full, independent investigation into Obama’s wiretapping.

The truth must come out—and if it does, the entire corrupt Obama regime and its collaborators will be exposed for the criminals they are.

The seminal question of Trump’s presidency is this: Who owns the government, the people or the deep state?

Who rules America, free citizens through their elected representatives or the government-media complex?

On those answers hang the fate of our constitutional republic.

Barack Obama, Jeff Kuhner, President Donald Trump, The greatest scandal of our time: Did a sitting American president spy on his successor?, WorldTribune.com