The 2012 debate for a pampered republic: Belt-tightening or more pump-priming?

“Now that no one buys our votes, the public has long since cast off its cares; the people that once bestowed commands, consulships, legions and all else, now meddles no more and longs eagerly for just two things — bread and circuses.” – Juvenal, circa 100 B.C.

Thus a Roman satirist lamented the fall from grace of his fellow citizens in their republic and anticipated the advent in a few decades of authoritarian rule, the Pax Romana — before it, too, failed and the united Mediterranean world slipped away. 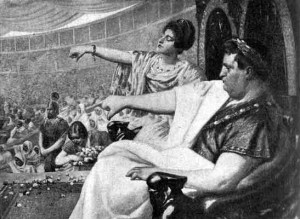 You don’t have to be too much of a Cassandra to wonder how far American society has drifted into its own obsession with bread and circuses. For despite all the elaborate structures that dwarf anything found in previous empires, the tendency to escape responsibility in modern U.S. public life appears to be growing. The remarkable volunteerism that French historian Alexis de Tocqueville found so unique to 1830s’ American society is still alive — but primarily in disappearing smaller towns. Increasingly greater dependence on government, along with calls for even more state intervention, have replaced it in our mega-population centers.

The argument often has been made that the process was inevitable, that elected government will always collapse as electors decide they can vote themselves more and more benefits from government, until eventually the takeaways are more than the economy can sustain. (In 2011, 45 million Americans were on food stamps, a 70 percent increase over 2007.)

How much the commonweal can afford depends on how much can be collected through taxes, and how skillfully the prestige of government can be used to produce short-term credit and debt to carry the state through the rough periods.

But since the Industrial Revolution began 300 years ago, another element has been added: the growing ability through technological innovation to produce goods and services with ever fewer resources, at least in man-hours by individual workers. Now there certainly is an argument that the Digital Revolution has increased that capacity for technological gain to an infinite degree. But like all technological innovation, it will come at a price. And there is little doubt some of the country’s 23 million unemployed and underemployed workers are in part a casualty.

Although the argument gets muddled by the politicians on both sides, how and why and when we tax the individual earner or entrepreneur to fund the commonweal is at the heart of whatever serious debate exists in this presidential election season.

It is not a new argument. Thomas Jefferson in 1816, translating a work on economy and taxation (which had not been published in its original French), put the problem of the relationship of economy, the state and the individual citizen in stark terms:

“To take from one, because it is thought that his own industry and that of his fathers has acquired too much, in order to spare to others, who, or whose fathers have not exercised equal industry and skill, is to violate arbitrarily the first principle of association: ‘the guarantee to everyone of a free exercise of his industry, & the fruits acquired by it.’ ”

It took another century before the American republic would permit direct federal taxation of its citizens without apportionment on a federal basis. The 16th Amendment to the Constitution to permit a federal personal income tax was a revolutionary step away from the country’s founding principles and that is why it was thought necessary to require changing the country’s founding document.

We are still wrestling with that change, though in modified forms. One evidence of that struggle is that almost half of the population now pays no personal income tax.

The argument is pretty simply put: Can the economic momentum which produced unequaled prosperity in post-World War II America be restarted by what was called in the New Deal era “pump-priming”, i.e., expanding already record government credit and debt levels to get the economy up and running again?

Or must we tighten our belts, cut back public expenditures, thereby permitting lower taxes, in order to liberate America’s entrepreneurial spirit to reassert itself in all its vigor?

Virtually all the economic and political arguments are subsidiary to this question and the differences between the two current presidential candidates boil down to where they fall on this divide. And in their collective wisdom, voters will make a decision on who is right, at least in the short term, this November, the circuses of the campaigns notwithstanding.

The 2012 debate for a pampered republic: Belt-tightening or more pump-priming? added by Editor One on September 3, 2012
View all posts by Editor One →