Text of Trump speech at Davos: ‘There has never been a better time to do business in America’

The following is the speech President Donald Trump delivered at the World Economic Forum at Davos, Switzerland on Jan. 26, 2018.

It’s a privilege to be here at this forum where leaders in business, science, art, diplomacy and world affairs have gathered for many, many years to discuss how we can advance prosperity, security and peace.

I’m here today to represent the interests of the American people and to affirm America’s friendship and partnership in building a better world. Like all nations represented at this great forum, America hopes for a future in which everyone can prosper and every child can grow up free from violence, poverty and fear. 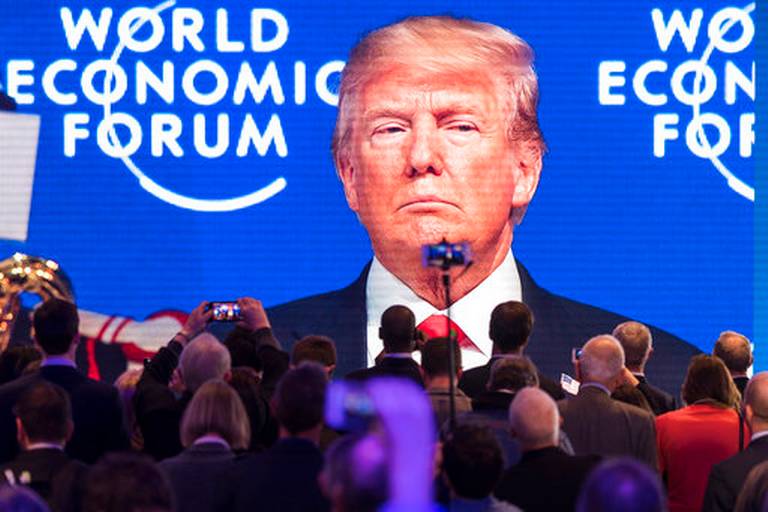 Over the past year we have made extraordinary strides in the U.S. We’re lifting up forgotten communities, creating exciting new opportunities and helping every American find their path to the American dream: The dream of a great job, a safe home, and a better life for their children. After years of stagnation, the United States is once again experiencing strong economic growth the stock market is smashing one record after another and has added more than $7 trillion in new wealth since my election.

Consumer confidence, business confidence and manufacturing confidence are the highest they have been in many decades. Since my election, we’ve created 2.4 million jobs, and that number is going up very, very substantially.

Small business optimism is at an all-time high. New unemployment claims are near the lowest we’ve seen in almost half a century. African-American unemployment has reached the lowest rate ever recorded in the United States, and so has unemployment among Hispanic Americans.

The world is witnessing the resurgence of a strong and prosperous America.

I’m here to deliver a simple message. There has never been a better time to hire, to build, to invest, and to grow in the United States. America is open for business, and we are competitive once again.

The American economy is by far the largest in the world, and we’ve just enacted the most significant tax cuts and reform in American history. We’ve massively cut taxes for the middle class, small businesses to let working families keep more of their hard-earned money. We lowered our corporate tax rate from 35 percent all the way down to 21 percent.

As a result, millions of workers have received tax cut bonuses from their employers in amounts as large as $3,000. The tax cut bill is expected to raise the average American’s household income by more than $4,000.

The world’s largest company, Apple, announced it plans to bring $245 billion in overseas profits home to America. Their total investment into the United States economy will be more than $350 billion over the next five years. Now is the perfect time to bring your business, your jobs and your investments to the United States this is especially true because we have undertaken the most extensive regulatory reduction ever conceived. Regulation is stealth taxation.

The U.S., like many other countries, has unelected bureaucrats, and we have — believe me, we have them all over the place — and they’ve imposed crushing and anti-business and anti-worker regulations on our citizens with no vote, no legislative debate and no real accountability in America.

Those days are over.

We are freeing our businesses so they can thrive and flourish. We are creating an environment that attracts capital, invites investment and rewards production. America is the place to do business, so come to America where you can innovate, create, and build.

I believe in America as president of the United States. I will always put America first, just like the leaders of other countries should put their country first, also.

But America first does not mean America alone. When the United States grows, so does the world.

American prosperity has created countless jobs all around the globe, and the drive for excellence has led to creativity and innovation in the U.S. has led to important discoveries that help people everywhere live more prosperous and far healthier lives.

As the United States pursues domestic reforms, to unleash jobs and growth, we are also working to reform the international trading system so that it promotes broadly shared prosperity and rewards to those who play by the rules.

We cannot have free and open trade if some countries exploit the system at the expense of others. We support free trade, but it needs to be fair and it needs to be reciprocal, because in the end, unfair trade undermines us all.

The United States will no longer turn a blind eye to unfair economic practices, including massive intellectual property theft, industrial subsidies, and pervasive, state-led economic planning. These and other predatory behaviors are distorting the global markets and harming businesses and workers not just in the U.S. but around the globe.

Just like we expect the leaders of other countries to protect their interests, as president of the United States, I will always protect the interests of our country, our companies, and our workers. We will enforce our trade laws and restore integrity to our trading system. Only by insisting on fair and reciprocal trade can we create a system that works not just for the U.S. but for all nations.

As I have said, the United States is prepared to negotiate mutually beneficial bilateral trade agreements with all countries. This will include the countries in TPP, which are very important. We have agreements with several of them already. We would consider negotiating with the rest, either individually or perhaps as a group if it is in the interests of all.

My administration is also taking swift action in other ways to restore American confidence and independence. We are lifting self-imposed restrictions on energy production to provide affordable power to our citizens and businesses and to promote energy security for our friends all around the world.

No country should be held hostage to a single provider of energy. America is roaring back, and now is the time to invest in the future of America.

We have dramatically cut taxes to make America competitive. We are eliminating burdensome regulations at a record pace. We are reforming the bureaucracy to make it lean, responsive and accountable, and we are ensuring our laws are enforced fairly. We have the best colleges and universities in the world, and we have the best workers in the world. Energy is abundant and affordable there has never been a better time to do business in America.

We are also making historic investments in the American military because we cannot have prosperity without security. To make the world safer from growing regimes, terrorism and revisionist powers, we are asking our friends and allies to invest in their own defenses and to meet their financial obligations. Our common security requires everyone to contribute their fair share.

My administration is proud to have led historic efforts at the United Nations Security Council and all around the world to unite all civilized nations in our campaign of maximum pressure to de-nuke the Korean peninsula.

We continue to call on partners to confront Iran’s support for terrorists and block Iran’s path to a nuclear weapon. We’re also working with allies and partners to destroy jihadist terrorist organizations such ISIS, and very successfully so.

The United States is leading a very broad coalition to deny terrorists control of their territory and populations, to cut off their funding and to discredit their wicked ideology. I am pleased to report that the coalition to defeat ISIS has retaken almost 100 percent of the territory once held by these killers in Iraq and Syria.

There is still more fighting and work to be done and to consolidate our gains. We are committed to ensuring that Afghanistan never again becomes a safe haven for terrorists who want to commit mass murder to our civilian populations.

I want to thank those nations represented here today that have joined in these crucial efforts. You are not just securing your own citizens, but saving lives and restoring hope for millions and millions of people.

When it comes to terrorism, we will do whatever is necessary to protect our nation. We will defend our citizens and our borders.

We are also securing our immigration system as a matter of both national and economic security. America is a cutting-edge economy. But our immigration system is stuck in the past. We must replace our current system of extended family chain migration with a merit-based system of admissions that selects new arrivals based on their ability to contribute to our economy, to support themselves financially and to strengthen our country.

In rebuilding America, we are also fully committed to developing our workforce. We are lifting people from dependence to independence because we know the single best anti-poverty program is a very simple and very beautiful paycheck.

To be successful, it is not enough to invest in our economy. We must invest in our people. When people are forgotten, the world becomes fractured. Only by hearing and responding to the voices of the forgotten can we create a bright future that is truly shared by all.

Represented in this room are some of the remarkable citizens from all over the world. You are national leaders, business titans, industry giants and many of the brightest minds in many fields.

Each of you has the power to change hearts, transform lives and shape your country’s destinies. With this power comes an obligation, however. A duty of loyalty to the people, workers, customers who have made you who you are.

So, together let us resolve to use our power, our resources and our voices, not just for ourselves but for our people, to lift their burdens, to raise their hopes and to empower their dreams, to protect their families, their communities, their histories and their futures.

That’s what we’re doing in America and the results are totally unmistakable. It’s why new businesses and investments are flooding in. It’s why our unemployment rate is the lowest it’s been in so many decades. It’s why America’s future has never been brighter. Today I am inviting all of you to become part of this incredible future we are building together. Thank you to our hosts.

Thank you to the leaders and innovators in the audience, but most importantly, thank you to all of the hard-working men and women who do their duty each and every day making this a better world for everyone together.

Thank you and God bless you all. Thank you very much.

Text of Trump speech at Davos: ‘There has never been a better time to do business in America’, WorldTribune.com