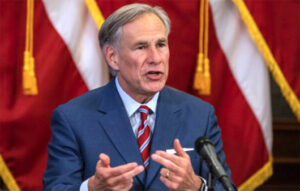 Texas Republican Gov. Greg Abbott on Thursday vowed to oppose what he called the Biden administration’s bid to destroy jobs with its volley of actions targeting the oil and gas industry.

Abbott signed an executive order during a press conference in Odessa on Thursday, which directed all state agencies to sue the Biden administration for any federal actions that threaten the Lone Star state’s energy sector.

“Texas is going to protect the oil and gas industry from any type of hostile attack launched from Washington D.C.,” Abbott said. “President Biden’s embrace of the green new deal is a job killer in Texas. It also takes a wrecking ball to the energy independence that Texas has been able to provide to the United States of America and Texas is not going to stand idly by and watch the Biden administration kill jobs in Midland, in Odessa or any other place across the entire region,” he added.

Abbott’s order (pdf) came on the heels of a series of executive actions taken by President Joe Biden in the name of fighting “climate change.” These include the decision to revoke authorization for the Keystone pipeline, the decision to rejoin the Paris Climate Accord, and a moratorium on issuing new oil and gas leases on federal land and waters.