Texas on Saturday began the unprecedented step of building its own state-funded border wall to counter what Gov. Greg Abbott called Team Biden’s open border policies which are having a “devastating” impact on the state on a daily basis. 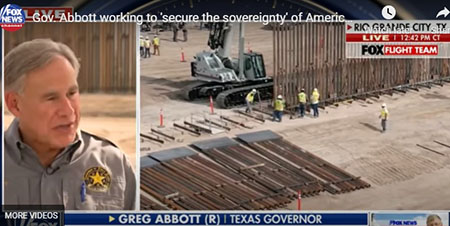 State commissioners unanimously approved $162 million for a total of eight miles of border wall that will fill gaps between portions of the federal border wall.

Abbott said Team Biden is making the Texas effort as difficult as possible by refusing to sell unused panels of wall to the state. The panels were already paid for during the Trump administration, but have been sitting unused since Joe Biden ended all border wall construction.

“It shows that the Biden administration will do everything they can to waste taxpayer money,” Abbott told Fox News. “Those panels they are not using are already paid for. They’re worth billions of dollars. We can be using them here, but Biden is letting them go to waste. That is an irresponsible use of taxpayer dollars.”

The Republican governor said it is “unprecedented for a state to have to step up and secure the sovereignty of the United States of America.”

Abbott said the state-funded wall is going up at a “very fast pace” as Team Biden’s open border policies are allowing a constant flow of illegals to enter the U.S. and essentially giving drug cartels free reign over the border region.

Texas has hired the same contractor that was building President Donald Trump’s wall until Biden cancelled the contract. The contractor, Posillico Civil, Inc., said it is committed to getting the new panels installed by the end of the year.

Texas builds its own border wall with no help from Team Biden added by Editor Two on December 19, 2021
View all posts by Editor Two →