One of the most depraved, purely evil corporate entities to be found in America today is Teen Vogue. This supposed fashion magazine aimed at younger readers is a cesspool of moral perversion and leftist political propaganda designed to distort the minds of our nation’s developing youth. And it is hardly a fringe publication. As a key spoke of a powerful publishing empire, Teen Vogue knows it can rely on the support of several well-known corporate and political backers as it sows its seeds of destruction, chief among them Democratic titan Hillary Clinton. 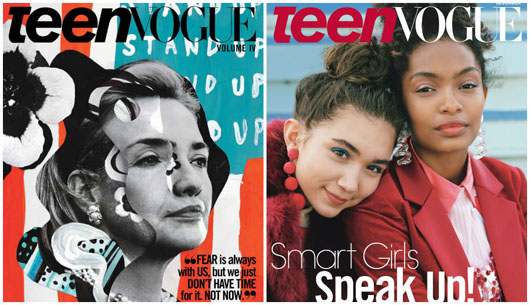 The political articles are just as over the top. A missive charmingly titled “The Second Amendment Has Always Been a Tool of White Supremacy” aptly captures the magazine’s absurdly leftist biases while another titled “ICE Raids: What Are Your Rights?” attempts to paint a picture of harried illegal alien youth who just want to read about fashion but instead face the jack-booted deportation squads of President Trump. “Don’t Open the Door,” reads a subhead to the lurid July 2019 article.

Teen Vogue is owned by Advance Magazine Publishers, a huge conglomerate with many notable brands. It is housed under the Conde Nast label, which also features the following publications:

In short, Advance is a major corporate player.

In addition to his duties at Conde Nast, CEO Roger Lynch is on the board of directors for prominent toy maker Mattel and “is a member of the Board of Overseers of the Tuck School at Dartmouth College and the Board of Councilors of the Dornsife College of Letters, Arts and Sciences at the University of Southern California,” his official corporate bio states.

In his role as CEO, Lynch signed his name in September to a letter from “leaders of some of America’s most respected companies” demanding the Senate pass gun control legislation. He has frequently bashed Trump on his personal Twitter account, citing New Yorker articles.

Anna Wintour, the artistic director for Conde Nast, is the power behind the big-ticket Vogue brand. She is a staunch Democrat and a rabid Planned Parenthood supporter with close ties to Hillary Clinton and Barack Obama. Wintour reportedly served as Hillary Clinton’s personal adviser on fashion during her failed 2016 presidential run while Obama reportedly considered appointing her as U.S. ambassador to Great Britain under his administration.

Teen Vogue has held annual summits since 2017 that are used to push its corrosive social agenda. The 2019 “Change the Future” conclave counted well-known companies American Eagle, Facebook, HBO and Nike among its official corporate “partners.”

Hillary Clinton spoke at the first-ever summit in 2017. “Getting Woke at the Teen Vogue Summit” reads the headline to an article on that summit on the website for Step Up, an “empowerment” organization for minority girls that served as a sponsor.

This is how the website The Wrap hysterically described Hillary’s appearance:

Here, Clinton was an iconic — and tragic — hero to young women born after September 11. Empirical observation suggests that for the activist women of Gen-Z, whose earliest presidential memories are of Barack Obama and formative years are scarred raw by the shock election and the Trump era, Clinton is the queen matriarch of the thoughtful, inclusive, steely and savvy culture that has been become Teen Vogue’s new brand.

“If you look at what just happened in the Virigina [sic] elections,” Clinton offered, “the turnout of young voters made a huge difference. This is the most inclusive, most diverse, most thoughtful generation. If young voters vote, we’re going to win.”

On Sunday, June 3, attendees will have the opportunity to turn their Summit learnings into action with a day of coordinated volunteer opportunities with a variety of nonprofit partners, including the Lower Eastside Girls Club, Planned Parenthood of New York City and NYC Votes.

That’s right, Conde Nast was encouraging its young Teen Vogue readers to volunteer at a Planned Parenthood clinic, and Al Gore was there to be a part of it all.

According to Folio: magazine, a second 2018 summit in December in Los Angeles featured “two returning sponsors, Pottery Barn’s PBteen and PlayStation, the first of which has participated in all three Summits, and the second of which was an original partner in the inaugural event in Dec. 2017.”