Having last year introduced its audience of mostly young girls to communist “legend” Karl Marx, Teen Vogue is now hoping the un-woke out there in the heartland will own up to their racist, homophobic, transphobic, all-other-phobic ways this Thursday.

Passing around the cranberry sauce and green beans this Thanksgiving provides social justice warriors across the land the opportunity to confront their “bigoted relatives,” Teen Vogue says. 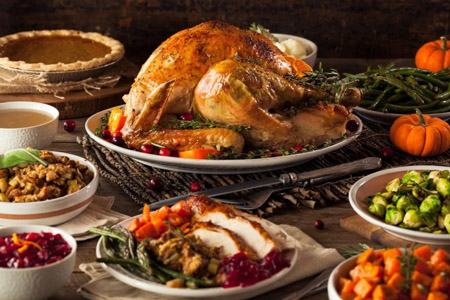 White or dark meat? Don’t even go there.

How about just having a nice Thanksgiving with relatives and friends? Not possible in Teen Vogue’s America.

“Some white people who see themselves as nonracist will just play nice instead of clapping back directly at these problematic family members. This year, consider doing something different,” Jenn M. Jackson writes for Teen Vogue.

Can’t we just forget to check our privilege for one day — or at least one meal?

No, it’s 2019, and this is what Jackson envisions at the Thanksgiving table: “Quietly forking away at your yams and green beans while Aunt Susan spews hateful messages about Black people, immigrants, or gender nonconforming people won’t do anything to change the status quo. It’s just another way of allowing these toxic ideas and beliefs to permeate throughout generations and social networks every day. How about stepping up to do something about it?”

Before you create a space for that pumpkin pie dessert, you should first create a “safe space,” Jackson says, so your white relatives can openly discuss “racist, transphobic, queer antagonistic, misogynistic, and generally ugly ideas.”

Speaking of “ugly ideas,” Teen Vogue in May of last year praised Karl Marx as an anti-capitalist scholar whose “ideas are more prevalent than you might realize.”

“Speaking to academic experts on the subject of Marxist theory, it was clear that Teen Vogue hoped to inspire the next proletariat overthrow of the bourgeoisie class,” investigative journalist Sara Carter noted.

Teen Vogue essentially held up Marx and his Communist Manifesto as prime teaching tools for a new generation of socialists.

Others suggest this new book by Kristian Niemietz — “Socialism: The Failed Idea That Never Dies”.

Niemietz writes: “Over the past hundred years, there have been more than two dozen attempts to build a socialist society. It has been tried in the Soviet Union, Yugoslavia, Albania, Poland, Vietnam, Bulgaria, Romania, Czechoslovakia, North Korea, Hungary, China, East Germany, Cuba, Tanzania, Benin, Laos, Algeria, South Yemen, Somalia, the Congo, Ethiopia, Cambodia, Mozambique, Angola, Nicaragua and Venezuela, among others. All of these attempts have ended in varying degrees of failure. How can an idea, which has failed so many times, in so many different variants and so many radically different settings, still be so popular?”