Victoria Nuland, who is currently serving as Team Biden’s Under Secretary of State for Political Affairs, was reportedly caught on tape in 2014 planning what was essentially a coup in which a U.S.-chosen candidate would be installed as Ukraine’s leader.

“Back in 2014 Nuland was very busy in Ukraine,” The Gateway Pundit noted in its report on the leaked call. “She was seen passing out cakes to protesters in Kiev, Ukraine at that time. A few weeks after this the protests in that country got violent and a number of individuals died during these riots. 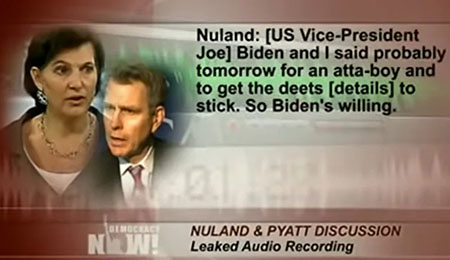 During the leaked call, Nuland and former U.S. Ambassador to Ukraine Jeffrey Pyatt discuss events in Ukraine. Nuland mentions Jake Sullivan in the call as well as Joe Biden, who was President Barack Obama’s point man on Ukraine.

In their 2014 phone conversation, Nuland and Pyatt discussed who should join a unity government in Ukraine. Nuland notified Pyatt that after the review of the three opposition candidates for the post of prime minister, the U.S. State Department had selected Arseniy Yatsenyuk.

“So in essence what occurred was that the former government of Ukraine was deposed, and the United States, with Biden at the helm, helped stage a coup and then pick the man they decided should lead Ukraine, not the duly elected head of the government,” Law Enforcement Today’s Jim Patrick noted.

Ironically, the phone call occurred at about the same time Hunter Biden was appointed to the board at Burisma Energy Holdings, one of the largest such companies in Ukraine, despite having no experience in the energy sector.

In the leaked 2014 phone conversation Nuland expressed frustration with the European Union’s response to the situation in Ukraine.

“So, that would be great, I think, to help glue this thing and have the UN [United Nations] help glue it. And, you know, F–k the EU,” Nuland said.

Pyatt said: “So let me work on Klitschko [former mayor of Kyiv] and if you can just keep…we want to try to get somebody with an international personality to come out here and help to midwife this thing. The other issue is some kind of outreach to Yanukovych [deposed Ukrainian president] but we probably regroup on that tomorrow as we see how things start to fall into place.”

Nuland: “So on that piece Geoff, when I wrote the note [U.S. vice-president’s national security adviser Jake] Sullivan’s come back to me VFR [direct to me], saying you need Biden and I said probably tomorrow for an atta-boy and to get the deets [details] to stick. So Biden’s willing.”

Pyatt: “Yeah. I guess…in terms of him not going into the government, just let him sort of stay out and do his political homework and stuff. I’m just thinking in terms of the process moving ahead and we want to keep the moderate Democrats together. The problem is going to be Tyahnybok and his guys…”

Nuland: “I think Yats is the guy who’s got the economic experience, the governing experience. He’s the…what he needs is Klitsch and Tyahnybok on the outside. He needs to be talking to them four times a week, you know. I think Klitsch going in…he’s going to be at that level working for Yatseniuk, it’s just not gonna work.”