The assault on language is so overwhelming that it takes columnist and historian Victor Davis Hanson to stop the movie and point out what is happening.

Team Biden is intent on using “the federal government’s powers . . . to suppress as ‘disinformation’ anything it doesn’t find useful,” he noted before providing abundant examples. 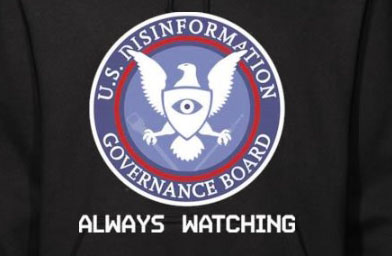 “As good Orwellians, they will try to convince us that high gas prices are welcome; negative growth is good; borders are ossified ideas; unaffordable housing aids the economy; inflation can prove useful; a declining stock market is encouraging; crime is a mere construct in the eye of the beholder,” Hanson wrote in a May 1 op-ed for American Greatness.

In its quest to scrub the public domain of what it decides is “disinformation” and “misinformation,” will the “Ministry of Truth” (a.k.a. Disinformation Governance Board) set the record straight on its new leader Nina Jankowicz and the following:

• Jankowicz herself spreading false rumors on social media that Donald Trump voters would show up at the polls in 2020 armed.

• Anthony Fauci denying the existence of federal funding for gain-of-function research at Wuhan.

• The “17 Nobel Prize-winning economists” who vouched in a letter that Joe Biden’s massive “Build Back Better” plan would not contribute to inflation.

• Those who employed the misinformationist Christopher Steele to slander presidential candidate Donald Trump.

• The 51 former intelligence officials who convinced voters before the 2020 election that Hunter Biden’s laptop was “Russian disinformation” [and then not only declined to apologize but warned against the break up of Big Tech monopolies].

• Media companies which banned any coverage of the Hunter Biden laptop story [in coordination with whom?].

• Obama caught during his 2012 re-election bid secretly promising Russian leader Dmitry Medvedev that the U.S. would deal away missile defense in Eastern Europe for Putin’s good behavior (“but it’s important for him to give me space”). Was this transparency or another example of how, but for a hot mic, “democracy dies in darkness”? Could Eastern Europeans have used such a discarded anti-missile system today?

Hanson noted that the Democrat Party “no longer exists. It is now hard-left, as sanctimonious as it is shrill. Such zealots will not discard their ideology. Rather they would prefer to embrace dogma and stay unpopular than adopt and gain public approval.”

So, as the 2022 midterms approach, Hanson added, “Do not expect a suddenly closed border, an abrupt resumption of the Keystone XL Pipeline, or a tough new federal crime bill. Do anticipate more wild conspiracy theories, more Russian disinformation, and more Pravda-like ministries.”

“We have seven more months before the midterms. As the disinformationists see no way out of their self-created Armageddon, expect more disinformation ministries, censorious czars, and hack grandees to emerge from the shadows.”

Disinformation Governance Board, NIna Jankowicz, Team Biden’s ‘Ministry of Truth’ could start by correcting its own long list of whoppers, WorldTribune.com

Team Biden’s ‘Ministry of Truth’ could start by correcting its own long list of whoppers added by Editor Two on May 2, 2022
View all posts by Editor Two →