Money from Team Biden’s Covid-19 stimulus bill is being used to pay off cartels to smuggle illegals into the United States, according to officials.

Former Immigration and Customs Enforcement (ICE) Director Thomas Homan said “there’s no doubt in my mind,” that the checks have been used to fund cartels who accumulate fortunes in the smuggling industry. 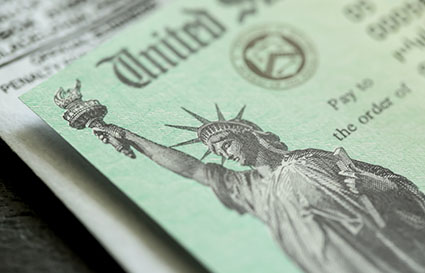 “They all get paid,” Wisconsin Republican Rep. Tom Tiffany told the Just the News A.M. TV show. “In fact, I suspect that some of those stimulus payments that are going out to illegals here in our country – that $1,400 they qualified for as the result of the $1.9 trillion stimulus bill passed a couple months ago – are probably going back to the smugglers.”

Homan said the decision by the Biden administration and members of Congress to send checks to illegal immigrants essentially is “completing the criminal conspiracy of trafficking human beings across our border, because it is well understood by members of the government in whose hands the money inevitably ends up.”

Former Customs and Border Protection Commissioner Mark Morgan, who served under both Presidents Obama and Trump, said that assertion is correct.

“We’ve been saying for a very long time that any type of stimulus or funding going to illegal immigrants is going to end up one of two places,” Morgan explained. “One – it’s going to be utilized to further ongoing illegal immigration. Two – it will end up back in the hands of relatives and friends in their origin countries as remittances. And the numbers bear that out … Mexican GDP is, in fact, reliant upon U.S. remittances.”

On a recent congressional trip to the Darién Gap in Panama, where thousands of migrants begin their trek to the U.S. southern border, Tiffany said he saw Western Union outlets stationed near migrant camps on either side of the gap, making it easy for relatives of migrants who are already in the United States to wire funds.

Just the News cited security officials as saying some of those funds are then used to pay off smugglers and members of cartels at various points along the migrants’ trip to the U.S.

Homan called the Darién Gap a “significant weakness” to U.S. national security because criminal and terror elements have more free rein in the area.

Tiffany said that if Kamala Harris “is truly serious about being the point person for the administration, in regards to border security, she needs to go south of the Northern Triangle, because it starts with the Darién Gap.”

One estimate put the death toll of people crossing the gap at 10 percent, Just the News noted. Sexual assault and rape are also rampant along the jungle route.

“We just saw misery,” Tiffany said in describing the people he saw making the journey across the 60 mile stretch of water, jungle, and mountainous terrain that divides North and South America. “We saw people with trench foot, we saw people that were pre-gangrenous with their feet looking as though they were about to fall off … and many of these people said that if they had known what it was going to be like, they probably would have stayed in their home countries.”

Tiffany said that the migrants were asked why they were making the trek: “We asked them ‘Why are you coming here now?’ and they said, ‘because the Southern Border is open.’ The signal was sent on January 20, you can now come to America. Many of these people were leading decent lives, they’re not people that should be asylees or are suffering from economic hardship.”