Team Biden: No lunch money for schools which do not force transgender ideology on kids

Team Biden has indicated it will withhold federal funding for school lunches from schools which refuse to teach transgender ideology to students. 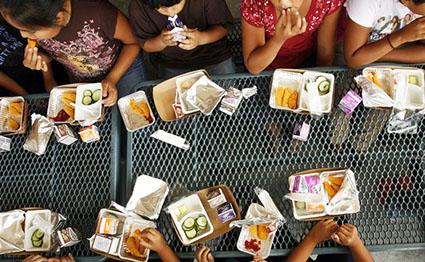 The Department of Agriculture announced last month that, in order for schools to receive funds for student lunches, breakfasts, and other food items, they must comply with Team Biden’s interpretation of the ban on discrimination based on sex in Title IX of the Education Amendments of 1972.

That interpretation includes allowing boys to use girls restrooms and locker rooms.

Much of the power Team Biden has in making this decision “appears to come from the U.S. Supreme Court ruling in Bostock v. Clayton County, in which Justice Neil Gorsuch, joined by the Court’s liberal wing, read transgender protections into the Civil Rights Act of 1964,” Breitbart reporter Breccan F. Thies noted on June 1.

“The Biden administration is grossly extending the Bostock holding where it does not belong,” Indiana Attorney General Todd Rokita told The Federalist. “Like many of the Biden administration’s power grabs, this imposition transgresses areas of proper state and local authority. As the principal guardians of federalism, state attorneys general have the ability to combat such overreach where it injures state functions.”

Agriculture Secretary Tom Vilsack said in a press release: “USDA is committed to administering all its programs with equity and fairness, and serving those in need with the highest dignity. A key step in advancing these principles is rooting out discrimination in any form – including discrimination based on sexual orientation and gender identity.”

Vilsack added: “At the same time, we must recognize the vulnerability of the LGBTQI+ communities and provide them with an avenue to grieve any discrimination they face. We hope that by standing firm against these inequities we will help bring about much-needed change.”

To receive such assistance under the new rule, Team Biden is forcing schools to comply with allowing boys to use girls’ changing and restroom facilities as well as sleeping areas, and forcing teachers to use chosen pronouns to describe children who believe they are transgender.

Indiana Non-Public Education Association executive director John Elcesser, speaking with The Federalist, slammed the Biden administration’s willingness to “play politics with feeding poor kids. If a school feels like they cannot participate because it’s in conflict with their mission or values, if a religious exemption is not granted, you’re taking away a program that’s feeding low-income kids.”

gender-identity, school lunch program, Team Biden: No lunch money for schools which do not force transgender ideology on kids, WorldTribune.com

Team Biden: No lunch money for schools which do not force transgender ideology on kids added by Editor Two on June 2, 2022
View all posts by Editor Two →