Members of the corporate media’s White House pack on Thursday were as usual salivating. But things are different when the Democrat Party controls the White House.

One of the major breaking news stories of the week wasconfirmation that Team Biden had shut down an investigation begun during the Trump administration into the origins of Covid-19 and whether it had escaped from a lab in Wuhan, China linked to the PLA’s bioweapons program. 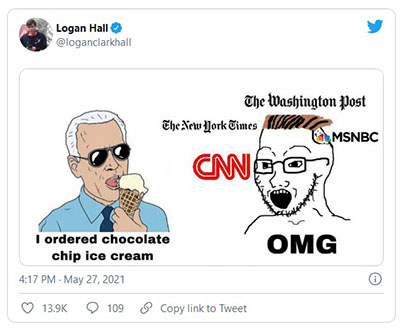 Big Media had a chance to ask Joe Biden about why he cut short this investigation.

Or the mounting evidence that Covid originated in that Wuhan lab.

Or the border crisis.

Instead, the state media propagandists were in lock step on the newsworthy flavor of the day: What type of ice cream had Biden chosen as he stopped at Honey Hut Ice Cream in Cleveland.

“Chocolate chocolate chip,” Biden replied to the probing question. Cheers and oohing could be heard from the press corps.

The “why are you so awesome” question was implied and did not have to be asked.

Guardian congressional reporter Hugo Lowell then took to Twitter to proclaim: “President Biden is having a chocolate chip ice cream at Honey Hut Ice Cream in Cleveland and it’s possibly the most Biden thing ever.”

MSNBC’s Ali Velshi, subbing for Rachel Maddow, led his show by narrating a three-minute segment about the history of Biden’s love of ice cream.

As part of its coverage of Biden eating a chocolate-chocolate-chip ice cream cone during his trip to Cleveland on Thursday, MSNBC uncovered footage of Biden at a congressional ice cream social in 1993.

Yes — led the show on a so-called “news” network.

“Our media is so embarrassing,” RealClearPolitics co-founder Tom Bevan wrote of the “coverage” of Biden’s stop in Cleveland.

“Is he ever *not* adorable?” journalist Glenn Greenwald quipped. “Didn’t realize that role of journalists was to ‘enjoy’ the U.S. President, though I’ve long know that that’s how they see their role and how Democrats see it when their party is in the White House.”

The New York Post “reported yesterday that Joe Biden had dinner with Hunter’s Eastern European oligarch business partners while he was VP but the corporate media would rather ask him about ice cream,” The Post’s deputy politics editor Emma-Jo Morris wrote.

I’m old enough to remember when presidential ice cream orders were covered like this: pic.twitter.com/TEohfeuIbJ

‘Our media is so embarrassing’: Biden choice of ice cream given priority over breaking news on Covid origins, corporate media, Joe Biden, WorldTribune.com