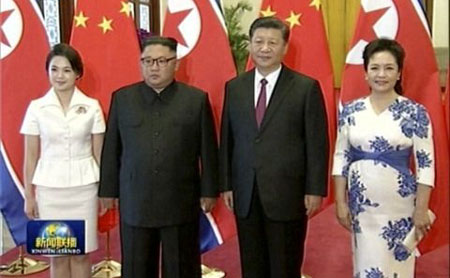 Analysis by WorldTribune Staff, June 19, 2018 North Korean leader Kim Jong-Un on June 19 began a two-day visit to Beijing being viewed as a vain attempt by China’s maximum leader Xi Jinping to save face after the international spectacle of the historic June 12 Kim-Trump summit. In his third visit to China in as […]

by WorldTribune Staff, April 19, 2018 North Korean leader Kim Jong-Un has elevated his wife to “first lady,” a title which has not been bestowed upon the nation’s dynastic leaders’ spouses since 1974. Ri Sol-Ju, believed to be 29, made her first solo appearance as first lady at a ballet performance by a visiting Chinese […] 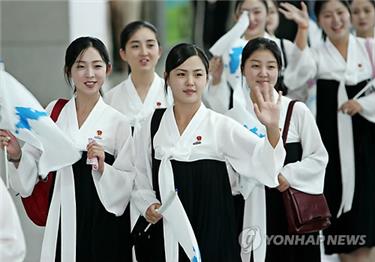 by WorldTribune Staff, January 17, 2018 North Korea announced on Jan. 17 that it would send a 230-member “army of beauties” cheering squad to the 2018 Winter Olympics at PyeongChang South Korea. The announcement was made during working-level talks between the two Koreas at the border village of Panmunjom. “The North has yet to disclose […]

Special to WorldTribune.com By Lee Jong-Heon, East-Asia-Intel.com SEOUL — North Korea’s leader Kim Jong-Un’s powerful aunt has not been seen in public for nearly three months and is believed to be critically ill. If so, the development could significantly impact the young leaders’ underlying power base among family members, sources and analysts here say. Kim Kyong-Hui has […]

Special to WorldTribune.com By Lee Jong-Heon, East-Asia-Intel.com North Korean leader Kim Jong-Un who mobilized the military and threatened U.S. allies with Weapons of Mass Destruction for the past months has shifted his focus to the economic front. On March 31, the Workers’ Party adopted the country’s “new strategic course of parallel economic construction and nuclear weapons development […]