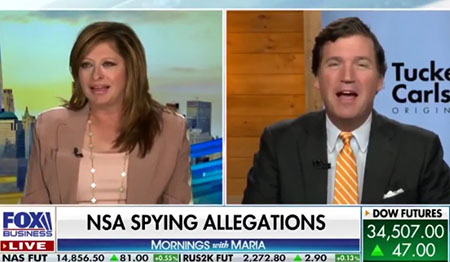 by WorldTribune Staff, July 7, 2021 The NSA, which is not supposed to be spying on Americans, is “using the information they gather to put leverage and threaten opposition journalists who criticize the Biden administration,” Fox News host Tucker Carlson said. “It’s happening to me right now and I think it’s shocking and I don’t […]

Special to WorldTribune.com By Donald Kirk, East-Asia-Intel.com Edward Snowden seems to have considered just about every conceivable option for asylum. At least two countries, Venezuela and Nicaragua, whose leaders are deeply critical of U.S. foreign policy, are happy to accept him. He would no doubt be glad to live in either while disclosing still more […]