Analysis by WorldTribune Staff, April 12, 2021 The Department of Justice is investigating Florida Republican Rep. Matt Gaetz over allegations of a “sexual relationship with a 17-year-old [whom he] paid for her to travel with him.” Gaetz has denied the allegations and linked them to an extortion attempt against him. There have been supporting statements […]

The Left’s unchecked reign of terror did not wait until Jan. 20 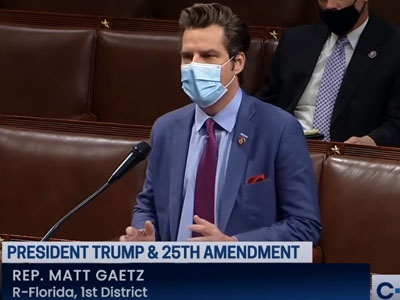 Analysis by WorldTribune Staff, January 14, 2021 Donald J. Trump is and has been the most hated figure ever in Washington. The reasons are obvious. Donald Trump, unlike those in D.C.’s taxpayer- and special interest-funded money matrix, made his money the old fashioned way. He is beholden to no one in the Swamp. And why […]