Islamic State (ISIS) has lost control of the last significant town it held in Syria, a military news service run by Hizbullah said on Nov. 19. 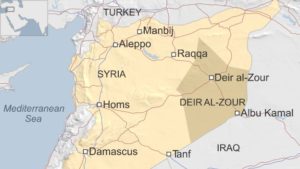 ISIS now controls only a few villages along the Euphrates and patches of nearby desert as well as isolated pockets in other parts of the country.

The U.S.-backed Syrian Democratic Forces (SDF) alliance of Kurdish and Arab militias has driven ISIS from much of its territory in the north, including its former capital at Raqqa.

While the SDF and Syrian forces supported by Iran and Russia have mostly avoided conflict with each other, Syrian and Iranian officials have said that Damascus will seek to regain control over areas held by the SDF.