Dr. Anthony Fauci is quite comfortable in the Washington, D.C. money matrix (aka, the swamp). In fact, the grand poobah of covid, who the record shows readily abandons science to synch with the leftist narrative, is the highest paid federal employee. 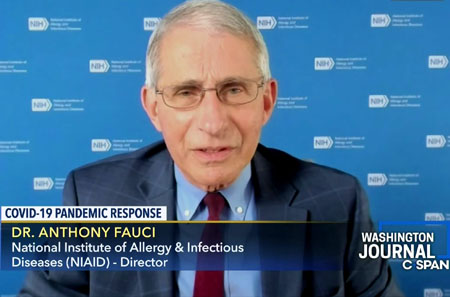 “The United States’s 4 million federal employees are usually subject to a pay cap, dubbed level IV, which is $172,500. However, Fauci and other doctors and scientists employed by the government are exempted from the cap to make their salaries more competitive to the private sector,” the Washington Examiner noted.

Fauci reflected on his time with Trump and called the 45th president “the skunk at the picnic” who was “saying things that didn’t make any scientific sense.”

Would that make Fauci the ant at the picnic? Ants are, after all, more likely to ruin a picnic than skunks.

On March 11 of last year the World Health Organization declared the coronavirus a “pandemic.”

Before this declaration, what did Fauci say?

Host: “Bottom line, we don’t have to worry about this one, right?”

As April rolled in and covid became a major crisis, Fauci voiced support for each state to issue stay-at-home orders, which would effectively wind up initiating some form of quarantine throughout the entire country.

Fox News host Tucker Carlson noted at the time: “More than 10 million Americans have already lost their jobs. Imagine another year of this. That would be national suicide, and yet, that is what Anthony Fauci is suggesting, at least.”

Carlson suggested Fauci was not looking at the economic ramifications of the coronavirus response because Fauci has “bulletproof job security.”

High U.S. unemployment rates, according to Carlson, are “a far bigger disaster than the virus itself by any measure.”

In a July 16, 2020 op-ed, Washington Times columnist Cheryl K. Chumley noted: “Fauci has indeed been wrong on the coronavirus from the get-go. And he never should have been given a White House platform to push his wrong, wrong, wrong viewpoints in the first place.”

Chumley continued: “It got to the point Fauci wasn’t just offering up his scientific view of the coronavirus, but practically dictating economic, political and social policy — in place of the president of the United States, in place of Congress, in place of governors and local governing agencies.

“When it comes to coronavirus numbers and figures and statistics, the one that really matters is the death count — the percentage of people who die from COVID-19 as compared to the number who survive. After all, if people are regularly testing positive for the coronavirus, but they either feel few effects or recover in rapid time — what’s the big deal?

“No need to shut down the economy.

“No need to shut down schools.

“No need to wear face masks and issue stay-at-home and social distancing orders.”

Fauci shrugged at the importance of the low mortality rate, saying: “It’s false narrative to take comfort in a lower rate of death. There’s so many other things that are dangerous and bad about the virus. Don’t get into false complacency.”

“The death rate is all that matters here, because it’s the death rate — the threat of death — that’s been used as justification to close down an entire country’s economy.”