A raucous session of Congress on July 16 saw House Speaker Nancy Pelosi castigated for breaking the chamber’s rules by labeling President Donald Trump a “racist”. That was the beginning.

Subsequently all Democrats (and four Republicans) voted to officially label the president as a “racist”. 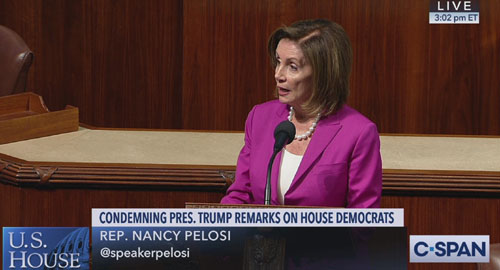 The resolution passed by a vote of 240-187. All Democrats voted yea, with Republicans joining them: Reps. Brian Fitzpatrick, Will Hurd, Fred Upton and Susan Brooks.

Trump, in a pair of tweets, said the Democrat leadership is too afraid to reign in the progressive wing of the party:

“The Democrat Congresswomen have been spewing some of the most vile, hateful, and disgusting things ever said by a politician in the House or Senate, & yet they get a free pass and a big embrace from the Democrat Party. Horrible anti-Israel, anti-USA, pro-terrorist & public…..

“…..shouting of the F…word, among many other terrible things, and the petrified Dems run for the hills. Why isn’t the House voting to rebuke the filthy and hate laced things they have said? Because they are the Radical Left, and the Democrats are afraid to take them on. Sad!”

The American Spectator’s Dan Flynn noted of the July 16 House spectacle: “When Rep. Ilhan Omar tweeted gross stereotypes about American Jews and supporters of Israel, the House of Representatives refused to condemn her online statements. ‘It’s all about the Benjamins, baby,’ she claimed regarding the support of American officials for Israel, explaining that ‘AIPAC!’ paid these politicians. She responded to criticism by fellow Democrat Nita Lowey: ‘Our democracy is built on debate, Congresswoman! I should not be expected to have allegiance/pledge support to a foreign country in order to serve my country in Congress or serve on committee.”

Flynn continued: “The ensuing House resolution curiously omitted Omar’s name and comments. Instead of condemning anti-Semitism alone, House Democrats diluted the resolution clearly spawned by Omar’s tweets by including all manner of bigotry.”

In contrast, the July 16 resolution, Flynn noted, “condemned President Trump by name. It read, in part, ‘President Donald Trump’s racist comments have legitimized fear and hatred of new Americans and people of color.’ Ironically, one of the four supposed ‘victims’ of the president’s words characterized Speaker Pelosi as guilty of racism last week.”

The July 16 session was notable for behavior by chronological adults which has never before been seen in the U.S. House of Representatives.

Breitbart News issued an account of what transpired on July 16 based on interviews with members and staff present on the House floor during the proceedings, and from conversations with others in touch with officials present “as the Democrats’ big anti-Trump parade was rained out by all the craziness.”

Members were on the floor debating a resolution condemning Trump for his tweets about the so-called “squad,” Democratic Reps. Alexandria Ocasio-Cortez of New York, Ayanna Pressley of Massachusetts, Ilhan Omar of Minnesota, and Rashida Tlaib of Michigan.

As Democrats took up the resolution on the floor of the House and began debate on it, Pelosi, joined the debate on the floor on the part of the Democrats, and launched into a tirade in which she accused the president of having made “racist” remarks.

Pelosi said: “Every single member of this institution…should join us in condemning the president’s racist tweets. To do anything less would be a shocking rejection of our values and a shameful abdication of our oath of office to protect the American people.”

Among other volumes, the House has used Thomas Jefferson’s “Manual of Parliamentary Practice” as a touchstone for House operations even today. Jefferson’s manual stated that House members cannot use language on the floor “which is personally offensive to the President.” The manual also said members cannot accuse the president of “having made a bigoted or racist statement.”

The House additionally has relied on Cannon’s Book of Precedents, authored by the late Missouri Rep. Clarence Cannon, a Democrat. Cannon’s book says that “personal criticism, innuendo, ridicule and terms of opprobrium” are out of the order in the House.

House Judiciary Committee ranking Republican Rep. Doug Collins of Georgia – who was leading the GOP side of the debate on the floor – challenged Pelosi’s comments.

Collins offered Pelosi a chance to change her remarks – including the claim that Trump made “racist” comments – without a formal challenge using the House rules. Pelosi declined, claiming she had cleared her commentary with the House’s parliamentarian before giving the remarks. But that turned out to be false.

Collins then made a formal inquiry into whether Pelosi violated the rules of the House, and, as Breitbart’s report noted, “the business of the U.S. House of Representatives came to a halt for a pause that ended up lasting more than two hours due to a number of hiccups for Democrats over the course of the inquiry.”

“They’re not your boss,” the aide said one Democrat was shouting about the parliamentarians. “They’re just advisers!”

Fox News’s Chad Pegram tweeted: “Pelosi appears to have left the floor … which is a violation of House Rules themselves when someone’s words are taken down. That partly could be why this is taking so long. This is not just a rank and file member. This is the House Speaker.”

Pegram added: “When words are taken down, the member accused of using inappropriate language must be seated in the House chamber and wait for the ruling.”

Amid the pandemonium in the House, Democrats’ Speaker pro tempore, Rep. Emanuel Cleaver of Missouri abandoned the chair – something sources present on the floor, many of whom have worked in the House for many years, told Breitbart News they are unsure has ever happened before in U.S. history.

“The fact that Speaker pro tempore Cleaver refused to read the parliamentary guidance and abandoned the chair was extraordinary,” one senior congressional aide who was on the floor for the proceedings told Breitbart News. “I have never seen that before.”

It may never have happened in U.S. history until now, when Pelosi violated the rules of the House.

Politico’s Jake Sherman tweeted: “Well this is unprecedented. Rep. Emanuel cleaver abandoned the chair as he was presiding over the chamber.”

Cleaver, sources say, had abandoned the floor when the parliamentarian asked him to read a paper confirming that Pelosi had in fact violated House rules by calling Trump’s tweets racist, and then proceed to call two votes to the floor to clean up her mess before eventually proceeding to the anti-Trump resolution.

Cleaver made a brief statement, saying “I abandon the chair,” slammed the gavel on the dias and stormed out of the chamber.

Later, House Majority Leader Steny Hoyer came to the floor and took over as the Speaker pro tempore to confirm that Pelosi’s remarks calling Trump’s tweets “racist” were in fact a violation of the rules of the House and were out of order.

The normal penalty for violating House rules would be barring Pelosi from speaking on the House floor for the rest of the legislative day, but observers reported that Hoyer set up a series of votes to make sure Pelosi’s comments in violation of the rules remained in the congressional record and that she would pay no penalty for the rules violation and would be able to speak on the House floor if she wanted to again on July 16.

Hoyer eventually announced the ruling that, based on the precedent “of May 15, 1984,” Pelosi’s language did not meet the standard.

The precedent came after Republican Newt Gingrich, then a Georgia congressman, sparred with then-House Speaker Tip O’Neill, a Massachusetts Democrat. O’Neill remarked: “My personal opinion is this: You deliberately stood in that well before an empty House and challenged these people, and you challenged their Americanism, and it is the lowest thing I have ever seen in my thirty-two years in Congress.”

The parliamentarian determined at the time that the speaker’s use of the word “lowest” amounted to inappropriate language, and O’Neill’s words were taken down.

House Minority Leader Kevin McCarthy, California Republican, tweeted: “The facts are clear: the House rules of order and decency were broken by the very person tasked with upholding them — the Speaker of the House. But just now, Democrats voted to ignore the rules and give special treatment to one of their own.”

McCarthy added: “Democrats have turned the House of Representatives into a weapon of political theater. They aren’t interested in legislation. They’re only here for retribution.”

As the debate continued, then, Democratic Rep. Eric Swalwell of California – who just dropped out of the 2020 presidential race – took to the floor and said that Trump “Talking about shithole countries is racist.”

As he did with Pelosi, Collins challenged Swalwell’s comments. Swalwell and the Democrats then stood down and withdrew the comments.