Iraq’s military launched an offensive on Aug. 19 to retake one of the last pockets of territory in Iraq held by Islamic State (ISIS). 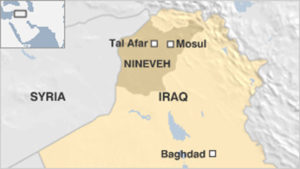 In announcing an offensive to retake Tal Afar, Iraqi Prime Minister Haider al-Abadi warned ISIS fighters in the city to “either surrender or die.”

Iraqi officials believe there are between 1,400 and 1,600 ISIS fighters in the Tal Afar area, including many foreign fighters, according to Iraqi Brig. Gen. Yahia Rasool.

“I don’t think it will be tougher than the battle of Mosul, taking into consideration the experience we got in Mosul,” Rasool told reporters.