Supreme Court ruling redefines what was meant by sex in 1964

The U.S. Supreme Court in a 6-3 ruling on Monday redefined “sex” in Title VII of the Civil Rights Act, determining that employers can no longer discriminate on the basis of “sexual orientation” or “gender identity.”

In the Civil Rights Act of 1964, Congress understood “sex” to mean male and female biologically. With Monday’s ruling, for example, an employer can’t fire a male employee for dressing like a woman on the job, WND.com noted. 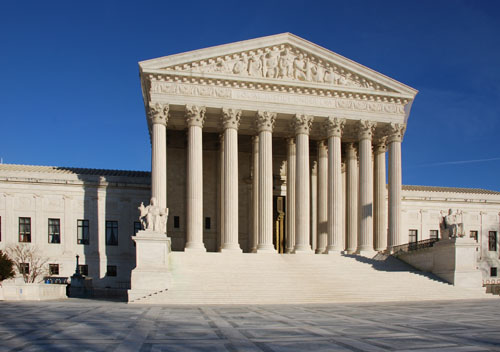 The ruling covered three cases. In one, a Michigan funeral home worker was fired after he began coming to work dressed as a woman and calling himself Aimee Stephens. In Georgia, county worker Gerald Bostock was fired as a child welfare advocate for conduct “unbecoming” a county employee after he joined a gay softball league. In the third case, New York skydiving instructor Donald Zarda was fired days after mentioning he was homosexual.

The decision gives the power to decide similar questions to federal judges — unless Congress passes legislation to reassert society’s recognition that men and women are different.

“Congress is unlikely to reclaim its power to maintain the civic distinction between men and women, in part, because the votes of 60 senators are needed to reverse the Court’s redefinition,” Breitbart News noted.

A dissenting opinion by Justices Samuel Alito and Clarence said: “There is only one word for what the Court has done today: legislation. The document that the Court releases is in the form of a judicial opinion interpreting a statute, but that is deceptive.”

Justice Brett Kavanaugh wrote in another dissent: “Instead of a hard-earned victory won through the democratic process, today’s victory is brought about by judicial dictate — judges latching on to a novel form of living literalism to rewrite ordinary meaning and remake American law. Under the Constitution and laws of the United States, this Court is the wrong body to change American law in that way.”

The court’s decision in Bostock vs. Clayton County, Georgia, “will have far-reaching consequences outside the workplace, as progressives and transgender groups try to expand the decision to many other areas of society,” Breitbart News noted.

The effect of the Court’s reasoning may be to force young women to compete against students who have a very significant biological advantage, including students who have the size and strength of a male but identify as female and students who are taking male hormones in order to transition from female to male.

Housing. The Court’s decision may lead to Title IX cases against any college that resists assigning students of the opposite biological sex as roommates.

This problem is perhaps most acute when it comes to the employment of teachers. A school’s standards for its faculty “communicate a particular way of life to its students,” and a “violation by the faculty of those precepts” may undermine the school’s “moral teaching.”

Healthcare benefits may emerge as an intense battleground under the Court’s holding. Transgender employees have brought suit under Title VII to challenge employer-provided health insurance plans that do not cover costly sex reassignment surgery.56 Similar claims have been brought under the Affordable Care Act (ACA), which broadly prohibits sex discrimination in the provision of healthcare.

Freedom of speech. The Court’s decision may even affect the way employers address their employees and the way teachers and school officials address students. Under established English usage, two sets of sex-specific singular personal pronouns are used to refer to someone in the third person (he, him, and his for males; she, her, and hers for females). But several different sets of gender-neutral pronouns have now been created and are preferred by some individuals who do not identify as falling into either of the two traditional categories.

The Court’s decision may also pressure employers to suppress any statements by employees expressing disapproval of same-sex relationships and sex reassignment procedures. Employers are already imposing such restrictions voluntarily.

The two justices warned: “Although the Court does not want to think about the consequences of its decision, we will not be able to avoid those issues for long. The entire Federal Judiciary will be mired for years in disputes about the reach of the Court’s reasoning.”

Bostock vs. Clayton County, SCOTUS, Supreme Court ruling redefines what was meant by sex in 1964, WorldTribune.com