As reports noted that other countries were sending special forces into Afghanistan to evacuate their nationals, Team Biden was relying on the Taliban’s word to grant U.S. citizens access to the Kabul airport. 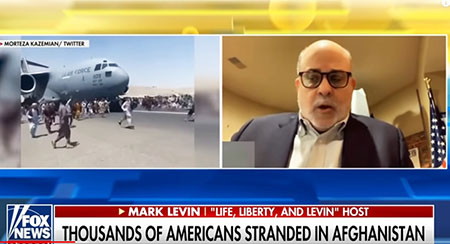 Mark Levin said on “Fox & Friends” that Joe Biden needs to “send our troops in and get our people out.”

“Why in the hell would we pull our military out” with U.S. civilians still there, Levin noted.

Former President Donald Trump said in an Aug. 19 statement: “First you bring out all of the American citizens. Then you bring out ALL equipment. Then you bomb the bases into smithereens—AND THEN YOU BRING OUT THE MILITARY. You don’t do it in reverse order like Biden and our woke Generals did. No chaos, no death — they wouldn’t even know we left!”

Levin wondered why the Biden administration is continuing negotiations with the Taliban, pointing out that Trump “negotiated” with the terror group after dropping bunker buster bombs on their hideouts. “That’s the only thing these people understand. They’re terrorists.”

Afghan military officials said the U.S. left Bagram Airfield after nearly 20 years by shutting off the electricity and slipping away in the night without notifying the base’s new Afghan commander, who discovered the Americans’ departure more than two hours after they left.

The U.S. announced it had completely vacated its biggest airfield in the country in advance of a final withdrawal the Pentagon said at the time would be completed by the end of August.

“We (heard) some rumor that the Americans had left Bagram … and finally by seven o’clock in the morning, we understood that it was confirmed that they had already left Bagram,” Gen. Mir Asadullah Kohistani, Bagram’s new commander said.

Lt. Gen. Michael Flynn said in a statement on Telegram:

With so many heads exploding on TV, social media, whatever, over the fall of Afghanistan to the Taliban (mine included). The citizens of the United States of America need to take a deep breath and really reflect on who we are as a nation. Bad things happen all the time. We will be judged not that something bad happened but by what we do about it. Right now, we need to save the Americans in harms way, save as many others that we can and we need to thank God and pray for the men and women in our Military that are once again being sent back into the fray to accomplish another thankless mission that will likely place them all in harms way. If people need to be removed from their positions (and I believe that some must — being caught this flat footed is inexcusable), that needs to happen but America cannot miss a beat saving our citizens who will be brutalized by an unforgiving enemy. This is far from over and there will be untold negative strategic consequences for the United States that our nation’s leadership had better start preparing for. God bless our Military and may God continue to bless and protect America.