“Millions of viewers are witnessing the most biased presidential campaign coverage in modern media history,” an analyst noted. 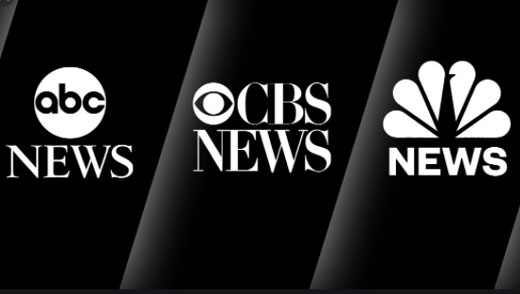 The major networks “chose to aim most of their attention and nearly all of their negative coverage on Trump, so Biden escaped any scrutiny of his left-wing policy positions, past job performance or character,” Media Research Center’s Rich Noyes noted on Aug. 17.

Due to the coronavirus pandemic, ABC, NBC and CBS evening news broadcasts are among the highest rated programs on television.

In the time period used to conduct the study, the networks focused 512 minutes of airtime on Trump and 58 minutes on Biden.

“The extra airtime devoted to Trump consisted almost entirely of anchors and reporters criticizing the President,” Noyes noted. “During these two months, our analysts documented 668 evaluative statements about the President, 95 percent of which (634) were negative, vs. a mere five percent (34) that were positive. Using the same methodology (fully described at the end of this article), we found very few evaluative statements about Joe Biden — just a dozen, two-thirds of which (67 percent) were positive.”

Noyes added: “I’ve been studying the news media and elections for more than 35 years. Trust me — there’s never been anything like it.”

Biden’s policy proposals — “which by his own admission would take his administration farther to the Left than the very liberal Obama administration” — received just 5 minutes, 22 seconds of airtime, “not one second of which included any critical analysis from any journalist,” Noyes noted.

Biden’s plan for $700 billion more in federal spending announced on July 9 received just 40 seconds of evening news airtime (25 seconds on ABC, 15 seconds on CBS, nothing on NBC). When he outlined his $2 trillion plan to combat climate change on July 14, it received six seconds, all of it on CBS, the study found.

Noyes noted: “If the networks weren’t scrutinizing Biden’s policies or his character, what accounted for his 58 minutes of airtime?”

Another 14 percent of Biden’s coverage (roughly eight minutes) consisted of reporters assessing where Biden stood in the race vs. Trump. The Media Research Center found 51 such statements about the Biden campaign, 96 percent of which (49) were positive; for Trump, 75 of 80 horse race judgments were negative (94 percent).

“No presidential candidate — not even Barack Obama in 2008 — has ever been on the receiving end of such a wide array of media favors,” Noyes noted. “While the former Vice President sits snugly in his basement before his nomination later this week, the entire liberal ‘news’ media complex have spent the summer on the attack against his opponent, even as they refuse to report anything negative about Biden himself.”